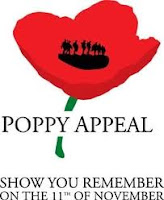 As we approach Remembrance Sunday some of you may have read the depressing story about the Royal British Legion having to provide adult minders for some of its young poppy sellers (army cadets) in Bradford, following a spate of attacks on them last year. This was reported in the Sunday Telegraph and the Mail on Sunday (both 21/10/2012), as you might expect. As the final item before the 8.00 news on Radio 4's Today (24/10/2012) - the subject of this ongoing study - Teresa Greener, the head of fundraising events at the Royal British Legion, was invited onto Today. She wasn't there to be asked about this startling state of affairs - or to give a boost to the launch of this year's appeal - but rather to face challenging questions about why we wear the poppy. It was this segment of the programme that particularly outraged the Biased BBC commenter who described it as "shameful" and regarded it as the epitome of bias.

The choice of an angle can, of course, be an indication of what matters to programme-makers. The decision to pass on the Bradford story - presuming (which is a reasonable assumption) that they knew about it - suggests that it wasn't of sufficient interest to them. So what angle caught their attention instead? What angle mattered enough to them for them to base a segment around it?


"The Royal British Legion launches its annual poppy appeal today. But why will you be wearing one? As a symbol of remembrance, of grief for those who have died in past wars? Or will you also be wearing it as a sign of your patriotism and support for troops fighting now? Well, Dr. Ted Harrison is a writer and artist. He created the giant display of poppies at St. Paul's Cathedral last year and he's just written a book called 'Remembrance Today'. Good morning Dr. Harrison."

"You're uneasy about what it's come to represent, aren't you?"

[TH: "Yes". I'll buy a poppy because it contributes to the Legion's valuable welfare work but I worry that the poppy has changed from being a symbol of grief and peace. If you don't wear a poppy now you're thought of being somehow unpatriotic, not associating yourself with the troops. We need "to go back to the roots of the poppy again."]

"Why does it matter, because in one sense you could argue that over the years, over the decades its meaning has changed  little, depending on what the country is involved in?"

[TH: It matters a great deal. Poppy mustn't glorify, trivialise or sentimentalise war. Royal British Legion is selling some sentimental stuff.  B-list celebrities wearing the poppy on TV. Politicians using it "as a symbol of their own patriotic virility."]

"But the British Legion last year raised record sums from the poppy appeal - £40 million. They're aiming for more this year. They..now you made the point they do good work, the money is spent well. Surely it is right that they capitalise in one sense...I mean they might say that they're not doing that... but that they raise as much money as they can, and if that's because somebody is feeling sentimental about it and, therefore, buys...puts more money into the tin, does it...what...?"

[TH:  This is a balance. Getting money to those who need it now is OK, but not if it goes towards glorifying or trivialising war. British Legion has high responsibility to ensure we're remembering for the right reasons. It's a half-truth to tell children we're remembering to honour those who kept us free because there are a lot of other wars where people gave their lives "for no reason at all". "The true horrors of war need to be expressed."]

"Dr. Harrison,  thank you very much for that. Listening to that is Teresa Greener, who is head of fundraising events at the Royal British Legion. Good morning."

"Is this something which you are aware of and perhaps a little bit concerned about at the Royal British Legion?"

[TG: "To be honest, no." The poppy has never been about a political statement. It is a symbol of remembrance. It's broadly worn across the whole community. Myriad different reasons why people wear their poppies.]

{interrupting} "If someone is wearing it..and over the past few years we've perhaps seen this..as a sign of patriotism and a sign of support for British troops in conflict now, are you quite comfortable with that?"

[TG:  "Yes we are". They are supporting troops. The 'in conflict' is not relevant. I don't think we're part of that political debate.]

"But what about the argument that Dr. Harrison says, that if you end up in the sort of situation where you have a sort of...and we've seen this sort of..some of the..the way that the ceremonies are done, that there's a danger that they could sentimentalise war and by doing so perhaps trivialise it, perhaps glorify it, and in a...and as a result of that make it more likely, not less?"

[TG:  "No, I'm sorry, I don't think it glorifies war in any way, shape or form." It's about remembering the horrors of war, which is how it started...]

{interrupting} "But it has changed from that, hasn't it?"

[TG: "No, I don't believe it has." I think we're still remembering all those killed or injured in conflict. Not about glorifying war..]

{interrupting} "But you've got...let's just be..today there's going to be...there's a pop concert, isn't there? The launch today is a pop concert with Pixie Lott, Alesha Dixon. You've got a song that you're releasing, the first time there's a poppy appeal single, which is about..written by Tim Rice and others called 'Landlocked', about letters home from people in the armed forces to their sweethearts?"

[TG:  Yes, but the point is that we want it to appeal to everybody. There's also the Military Wives' Choir, the Band of the Grenadier Guards, So there's tradition and the more modern. As for the point about B-list celebrities wearing poppies, I'm sorry, whether you think they're B, A or Z it doesn't mean they can't feel strongly about remembrance and wear a poppy...]

{interrupting} "Teresa Greener, we'll leave it there. Thank you very much."

So, the angle that took the fancy of the makers of Today was the moral and political queasiness of Dr. Harrison over the way he feels that the poppy is being transformed into an object of patriotism, sentimentality, and commercialisation, risking the trivialisation and glorification of war. Unsympathetic types (you know who you are!) might call this 'liberal hand-wringing'.

If the name (and voice) seems familiar, Ted broadcast for the BBC for some 25 years, acting as a  reporter and presenter for many famous BBC programmes, especially on Radio 4. (He presented Sunday for a while). Sarah's interview with him was gentle and interruption-free, though she did ask him two questions from a contrary point of view. Her interview with Teresa Greener was less respectful in tone, more challenging, more full of interruptions - though it was hardly rude.

Now, I have to say that, though I think the choice of angle does betray a liberal bias on the part of the programme-makers, the issues raised are ones I suspect many listeners would have found thought-provoking (in a good way). I think it's a shame that the discussion was held on the day of the launch of the poppy appeal though. It would have been much better had it been staged a week or so after Remembrance Sunday, but I don't think it's in any way beyond the pale to air the views of Ted Harrison or to question the head of fundraising at the Royal British Legion about them. Do you?
Posted by Craig at 14:55