Are we all OK with that?

We may not all be 100% comfortable with men talking about their husbands. “Speak for yourself!” do  I hear you say? Well, I am speaking for me. It’s not so much that I care one way or the other about same-sex marriage, it’s a language thing. I wouldn’t mind if they used an expression like ‘my spouse’ instead.

The word ‘husband’ conjures up more than gender-neutral ‘partner in marriage’. For me, the word emotes masculinity in a nurturing, protective kind of way, and a bloke who mentions his ‘husband’ instantly clothes himself in a frilly pinny. Not that Dave Rubin appears at all emasculated in this video, despite referring to his husband.  (Has anyone ever heard Peter Whittle doing that?)

************
I know I keep posting videos that include other people’s negative opinions of the BBC instead of expressing my own. The best excuse I can offer for that is that I can’t bear to watch the BBC at the moment.

I lie. I do watch the Saturday night double-bill Scandi-Noir offering on BBC Four. Something to look forward to, (although I hated 'Twin', mainly because I found the tale deeply unconvincing and I didn’t warm to the actor.)

State of Happiness is promising. Full of 60s nostalgia and the usual Scandi-Noir mixture of personal and political intrigue. Like Mad Men but with a parochial flavour and more—-Norweigan.

One other topic I wanted to mention - not especially BBC-related - is addressed by my favourite TCW author, Margaret Ashworth. (As well as Karen Harradine, for obvious reasons)

I have a policy of never commenting on other blogs - it’s a kind of self-imposed tradition which I religiously uphold (despite having forgotten the original reason for inventing it) so mentioning this here is my other option. I read Margaret Ashworth’s post about the troupe of Bacup mummers known as ‘Nutters’ (origin of nickname being actual nuts and not a politically incorrect reference to insanity) who perform an annual ritual of parading… wait for it… ‘blacked-up’. Margaret explains,

“The Moorish pirates which originated from North Africa are said to have settled in Cornwall and they became employed in the local mines.”

but at the time of writing, as far as I can see, neither she or anyone below the line has mentioned Cornwall’s (Padstow’s) controversial “Darkie Day”. In comparison to the smartly-dressed Bacup Nutters, Padstow’s Darkies look a bit of a shambles, and I only mention it because I find that it does have a BBC related aspect after all.  One which I found amusing, so there. 2006: “MP calls for Darkie Day to stop”!  It made me laugh anyway.  Diane Abbott, “Britain’s first black woman MP,” says it’s racist. 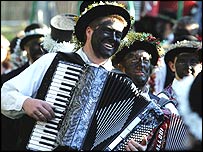 As a fan of upholding obscure traditions, I did wonder if Diane Abbott is OK with the nutters or if any sensitive actual  ‘nutters’ have called for the Bacup mummers to change their name to something less offensive and more gender-neutral such as ‘dancing parents with poor mental health’. 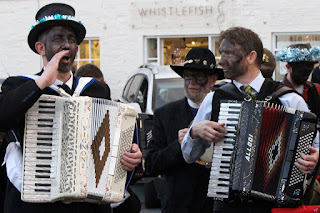