Summary of complaint (in full) 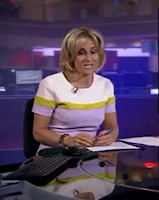 The BBC has spoken (again):


We received complaints about the introduction to the programme.

Our response We would like to make absolutely clear that Emily Maitlis was not ‘removed’ or ‘suspended’ from last night’s programme, despite much speculation to the contrary. She herself has tweeted that she ‘asked for the night off’.

The BBC must uphold the highest standards of due impartiality in its news output. We reviewed the entirety of Newsnight on Tuesday May 26th, including the opening section, and while we believe the programme contained fair, reasonable and rigorous journalism, we feel that we should have done more to make clear the introduction was a summary of the questions we would examine, with all the accompanying evidence, in the rest of the programme. As it was, we believe the introduction we broadcast did not meet our standards of due impartiality. Our staff have been reminded of the guidelines.

Newsnight has a long-established and recognised reputation for excellent journalism, for scrutinising arguments and for holding power to account, which it does on a daily basis, including the night in question.

Our editorial guidelines allow us to make professional judgments but not to express opinion.

The dividing line can be fine, but we aim to say so if we think we have overstepped the mark.

The introduction to Newsnight was intended as a summary of the issues that would be explored, with all the supporting facts and evidence, in the programme. But as broadcast, it risked giving the perception that the BBC was taking sides, and expressing an opinion, rather than being impartial.

It said that ‘the country’ was ‘shocked the government cannot see’ Dominic Cummings broke lockdown rules; that he ‘made those who struggled to keep the rules feel like fools’.

But there are some who do not share this opinion, nor think that the issue is a ‘scandal’ or the Prime Minister has displayed ‘blind loyalty’.

By presenting a matter of public and political debate as if the country was unanimous in its view, we consider Newsnight risked giving the perception that the BBC was taking sides - or that the introduction constituted the presenter’s opinions, rather than a summary of the journalism which would follow, which explored these issues rigorously and fairly and, crucially, with the supporting evidence.

This is not a question of apportioning blame to anyone.

It is a question of accountability to our audiences.

Our audiences hold the BBC in high trust, not least because we hold ourselves to exacting standards, and we do not want to forfeit this by ignoring our own rules.

The BBC's official response begins, oddly, by defending itself against the misplaced claims spread by Twitter and the Guardian that Emily Maitlis had been suspended and removed from hosting Newsnight on Wednesday. We BBC-geeky types here got that right on Wednesday night, and guessed the truth - a hissy fit. I'm assuming the BBC started this statement with that side issue because it's an easy place for them to start.

That said, the BBC is sticking to its guns and stating - rightly - that Emily Maitlis's monologue/introduction didn't meet the BBC's "high standards" of due impartiality and that Newsnight was guilty of "ignoring [the BBC's] own rules".

Yes, the complaint summary uses the weasel-words phrase "it risked giving the perception", but I suspect that's a case of sugaring the pill - as employers probably should do when making public their rebukes to employees.

And I like the fact that the BBC spells out some examples of why Emily Maitlis's language failed their impartiality tests, though it misses others, such as the particularly egregious use of the word "lazy" in her criticism of Dominic Cummings's use of the phrase "the elite" (noted by Sue).

The BBC points out that "some" don't share Emily Maitlis's opinions on the matter - which is certainly true. She wasn't speaking for the nation, only part of it (though even if she was speaking for most of it, it would still breach BBC guidelines on impartiality).

"This is not a question of apportioning blame to anyone". Why not?

That's the key thing, I think. The BBC isn't apportioning blame. They aren't suspending Emily Maitlis, or Esme Wren. Or taking any meaningful disciplinary steps to punish those who broke the rules. They are merely wagging their fingers and slapping wrists. So Emily Maitlis, Esme Wren, Lewis Goodall, et al, will surely just carry on now.

And it's not as if Emily Maitlis hasn't brought the programme into disrepute before. The BBC had  to apologise to Richard Tice and Rod Liddle because of her hostility towards them.

And as Rod Liddle notes, after the BBC apologised to him for her being overly personal in her hostility towards him, the BBC said it wouldn't happen again.

Well, it has happened again, and Emily Maitlis and Newsnight appear to be getting away with it again.

Yes, their egos might have a bruise or two, but that's it really it seems.

It's all words and no action from the BBC, isn't it? Is this anywhere near good enough?
Posted by Craig at 13:42