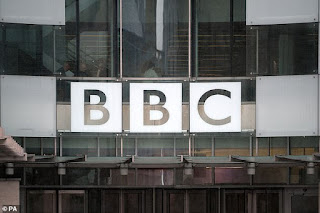 Hiring Richard Sambrook to review how the BBC “maintains impartiality on social media, amid concerns that journalists are discrediting the corporation by revealing their opinions” is a bit like getting the Supreme Court of Injustice to adjudicate on the lawfulness of something Lady Hale isn’t keen on. As soon as anyone cites the Cardiff University study as definitive (on BBC impartiality) they’re on a sticky wicket.

“Maintains"? I think that train left the station some time ago.

Never mind “social media”, what about directly on the *actual* BBC? Surely everyone knows the BBC acts as an unofficial wing of the Labour Party?   Do we just have to take that into account forever because that’s the way it is?  Or will someone somewhere do something about it?

“Of course, plenty of media figures are open about their political views. Several have left Newsnight in the past and pursued modestly successful careers in Left-wing activism.

[...] “After the declining standards of recent years, I know many who no longer bother to appear on Newsnight when asked, and not just when Maitlis is presenting. Many believe it has increasingly come to resemble the unwatchable Channel 4 News and, more importantly, they feel that it is no longer worth it. Fifteen years ago, when Jeremy Paxman was the presenter, being on Newsnight was an event for guests and viewers alike. Commentators would come off air to find their phones buzzing with congratulations or commiserations.

Today, the buzz has long stopped and the programme has now come to feel like it is being broadcast into a great silence.”

Douglas Murray is a fine fellow, but even he is not as BBC-geeky as some of us. Holding Jeremy Paxman up as a representative of ‘better times’ strikes a bit of a bum note with me. Maybe go back much further and try, say, Robin Day?