There's quite a striking revelation from Anita Singh in today's Daily Telegraph.

She quotes a letter to a complainant from the head of the BBC's complaints unit, Jeremy Hayes, in which Mr Hayes objects to Emily Maitlis's interviewing style during a March 2019 interview with Jacob Rees-Mogg.

Mr Hayes writes that the interview "cast more heat than light" and describes Ms Maitlis's "failure to cast light on matters" as "regrettable", doing "little to aid audience understanding of the issues discussed".

He even appears to sympathise with the complainant's description of Emily's laughter as "mocking" (a hallmark of her style we've commented on quite a few times before).

The same article also notes that the Newsnight presenter remains unabashed about her behaviour, sharing the following tweet demanding that her employers show her more respect: 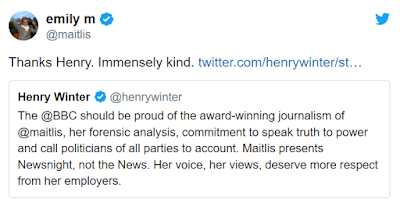 Such brazen behaviour suggests that Charles Moore, also writing in the Telegraph, has it right. It's a win-win situation for her. What matters to her is how well what she says and does goes down with the people who really matter to her - her colleagues and her Twitter followers. She's clearly soaking in their admiration. Plus, for all her present discomfort, she will be doubtless also be relishing the increased fame. And, given what happened to Naga Munchetty...

Ms Maitlis might well win...a reprieve, perhaps slightly qualified by bureaucratic mumbling about “fresh guidelines” on BBC impartiality on social media which have been commissioned from its former Director of Global News, Richard Sambrook. Then Ms Valiant-for-Truth will have prevailed against the “suits” and the Government. She will have been allowed to state, as fact, that Dominic Cummings did break the rules and that Boris lied. Even if she loses, and the ruling against her stands, she is most unlikely to be demoted, let alone sacked. The suits will be portrayed as having given in to Government pressure. In due time, Emily will be promoted to a show with more viewers than Newsnight, or hired by a rival channel.