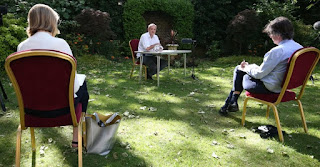 The media has taken on the role of Her Majesty’s official opposition, which is quite understandable, given that the Labour party is still in intensive care. A place-holding position, if you like.

I’ve just heard Victoria Derbyshire cornering Dan Hodges into defending the least credible parts of the Cummings tale, particularly, the dodgy eyesight driving test manoeuvre. What the Cummings family did was definitely not cricket, and being forced into the defensive on a dodgy wicket is where the BBC has the sensible people (who see this as a broader issue) over a barrel. A principle is involved!

The fact is that anyone who has to live and work in a multicultural metropolitan hell-hole would prefer to get away somewhere airy, especially if they were feeling apprehensive, under the weather and / or aware of the looming catastrophe that might be about to befall the human race.

Dom obviously does think there’s one rule for “us” and another for “everybody else” because there is one rule for us and one for everybody else. There always was and always will be. And why not?
Not everyone is despised by the entire media class, for a start. Not everyone’s every move is scrutinised to within an inch of its life by a hostile press.

The media abides precisely by such double-standards, so it has no legitimate business criticising others for doing the same thing, especially as it does so with such disingenuous and politically motivated sanctimony.

When the media threatens “This story is not going to go away! Cummings should resign so that the government can get back to proper business” they really mean “we will continue to ferret out details, discrepancies and assorted minutiae about Dominic Cummings, therefore obstructing ‘proper business’ ourselves, and blaming Boris for ‘making Cummings the story’ until we’re distracted by the next scandal.

"Is it entirely beyond the wit of our gilded political correspondents to ask a different question to the one asked by the previous interlocutor? One after the other they lined up to ask Dominic Cummings the same question, over and over again. Does Peston think he’s asking it better than Kuenssberg? Does Beth Rigby think that asking it for a fourth time will be more elucidatory because she asked it with open contempt in her voice? And how magnificently puffed up they all were. When they were en route to the press conference did they all think the same thing: that they had the killer question and nobody else would have thought of it? Dimbojournalism.

Liddle hints that his article has been ‘edited’. Gosh!

Update:
This thread is full of fun.
I urge you to read Melanie Phillips too. Although I don’t feel motivated to defend Dom C’s conduct with as much conviction as others have done, the bigger picture - that the left-leaning anti-Brexit press is hell-bent on derailing the political destination chosen by the voters  - is the real scandal.

Remember; the news we get is written and dished up by journalists and media hacks, and interviews are conducted by them too. They’ve closed ranks, even many of the ‘good’ ones, as they would; and all we can do about it is sit and watch.

Here’s Maggie Foster miming a fine Sir Keir. Ah! Shame it won't play! (Oh yes it will! The problem must've been at my end)