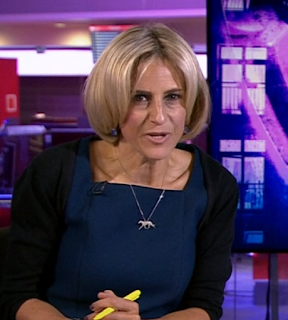 I wonder if Emily Maitlis now tops the charts for most 'Upheld' complaints over the past couple of years as far as the BBC goes?

(Maybe she's aiming to get into the Guinness Book of Records?)

In September 2019 the BBC's Executive Complaints Unit upheld a complaint against her for her "sneering and bullying...persistent and personal" interview with Rod Liddle.
In May 2020 the BBC found her to be in breach of their impartiality guidelines again over her (in)famous Newsnight Dominic Cummings monologue.
And in December 2020 - on Christmas Eve to be precise (sneaked out the day before Christmas, when the Brexit deal was agreed and major new Covid lockdown measures announced, some nine months on from the original programme) - the BBC released their latest ruling against Emily Maitlis for her March 2020 documentary, Taking Control: The Dominic Cummings Story.
Remarkably, they cleared her over impartiality but ruled against her over accuracy.
The News-watch complaint itself ran as follows:

This programme set out to explore the career, character and thinking of Dominic Cummings, with contributions from a range of critics and admirers. A viewer complained that the programme overall was biased against Mr Cummings (lacking “sufficient balancing opinion”), and gave the impression “That he was prepared to be recklessly violent towards political opponents; that he had ‘tribalist’ ‘neo fascist’ prejudice against Muslims; and that he was a liar who grossly misrepresented statistics in order to further his political aims”. The ECU considered the complaint in the light of the BBC’s editorial standards of impartiality and accuracy.

And this is the ruling against Emily Maitlis:

The attribution of prejudice against Muslims related to a sequence which included the following quotation from a paper entitled “How Demographic Decline and its financial consequences will sink the European Dream” published by a think tank directed by Mr Cummings: “The consequences of economic stagnation coinciding with rising Muslim immigration cannot fill anyone familiar with European history with anything other than a sense of apprehension, at least, about the future of the Continent”. The ECU agreed that, in the context of this sequence, the quotation tended to support the impression complained of. In the think tank paper the quotation stood in a context which pointed to Europe’s relative difficulty in integrating immigrants, rather than anything connected with Islam, as the source of tension, and the paper itself concluded “There is little reason to be optimistic about Europe’s capacity to avoid a growth of extremist political activity, or its desire to avoid the traditional response of polities in crisis – blaming foreigners”. In the ECU’s judgement, the quotation would have conveyed a different impression in the programme if more had been done to reflect its original context. As this risked misleading viewers, there was a breach of the BBC’s standards of accuracy, and this aspect of the complaint was upheld.

The BBC is notoriously poor at making concessions over such things, and now Emily Maitlis's failings have forced the BBC into admitting that its critics were right three times in the last year and a bit alone. You'd think they might take action.

Fear not though, if you're worried for Emily. I'm sure - as usual - that the full force of the BBC won't fall on her head and that she'll be allowed to carry on regardless. She's a world record to win after all. You go girl!