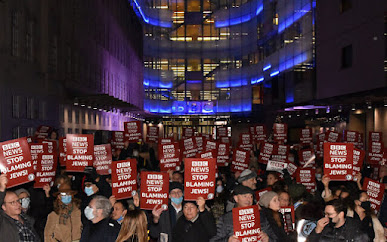 I can't find much coverage of the protest that took place outside Broadcasting House on Monday evening. The BBC rarely reports protests against itself (well, why would it?) but the only "mainstream' press report I can find so far today is in OMG The Daily Mail.

The protest, which was by all accounts well attended, was to register the anger about the BBC's biased and inflammatory reporting of an ugly incident that took place recently on London's famous Oxford Street.  Phone cameras inside the bus caught images of several angry young men spitting, banging shoes against the windows, and making hostile gestures at a group of young Jewish passengers who had just been celebrating Chanukah.

The BBC's report identified the victims as Jewish, but the identity of the perpetrators was left to the imagination. However, a specific religion was alluded to indirectly, in the form of a two-word insult that allegedly came from inside the bus, namely: "Dirty Muslims."

The BBC chose to report this peculiar and quite unlikely (but allegedly overheard) exclamation in a way that suggested it was a provocation, impliedly an altercation between two evenly-matched rivals. That the Jews got what was coming. "They asked for it."

Originally the report read "racial slurs were heard from inside the bus" - later amended to the singular: "a racial slur."  Still a slur, but just the one.

This allegation was vigorously denied, but let's get real. Even if someone did utter such a remark, would that amount to an irresistible provocation, whether it was uttered before, during, or after the incident?

The fact that the BBC insisted on keeping the 'racial slur' phrase in their report despite the lack of corroborating evidence was the primary reason for that protest. The whole thing has drawn attention to the BBC's covert hostility to the Jewish community and its history of one-sided, 'half-a-story' reporting of matters concerning Israel. People are once again asking to see the famous Balen report, the one that the BBC has devoted a few hundred thousand quidsworth of legal fees to keep secret.