The reporter behind the BBC's write-up about the Oxford Street antisemitic incident, Harry Farley, Senior Broadcast Journalist at BBC News, is a familiar name to me because he's part of the team on Radio 4's Sunday. He was also the reporter behind the 'Islamophobia' story in connection to Rochdale grooming gangs put out the other day across the BBC, 'Is British media Islamophobic?'

Here's a small, mostly pre-BBC selection of his past tweets [as noting such things is all the rage these days]:

Harry Farley: So there's some good news and bad news. Good news is EUref will be over in 24 hours. Bad news is Donald Trump arrives in UK on Friday.
10:59 PM · Jun 22, 2016
Stewart Green: What is ‘Palestinian land’? What even is a Palestinian? Shame to see Christian media jumping on this bandwagon.
Harry Farley [replying to Stewart Green]: It's an independent state next to Israel and recognised as such as by around 70% of countries.
4:12 PM · Jan 23, 2017
Harry Farley: My Uber man is listening to Nigel Farage on LBC. First time I’ve heard it and absolutely extraordinary. No pretence. He’s given hours of airtime to openly whip up hatred.
7:47 PM · Dec 14, 2017
Harry Farley: A minor personal observation: I’ve heard quite a few comparisons to the “commercial sector” in the last few days of Brexit debate. “This would never happen in the commercial world” ... “if this was the business world x would happen” as if that shows us the way forward. Putting aside the vast differences between the two and the limits of useful comparisons, just a reminder that it was the “commercial sector” who gave us a global crisis that we are still reeling from a decade later. Maybe we can draw inspiration from somewhere else?
5:55 PM · Dec 10, 2018
Very 'BBC'.
UPDATE 5/12 - Here's a surprise... 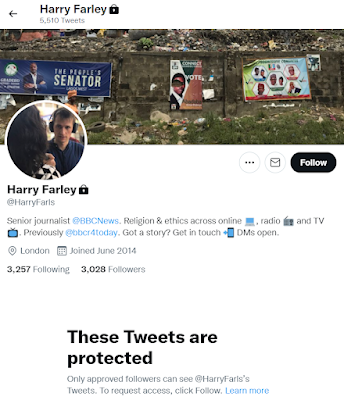