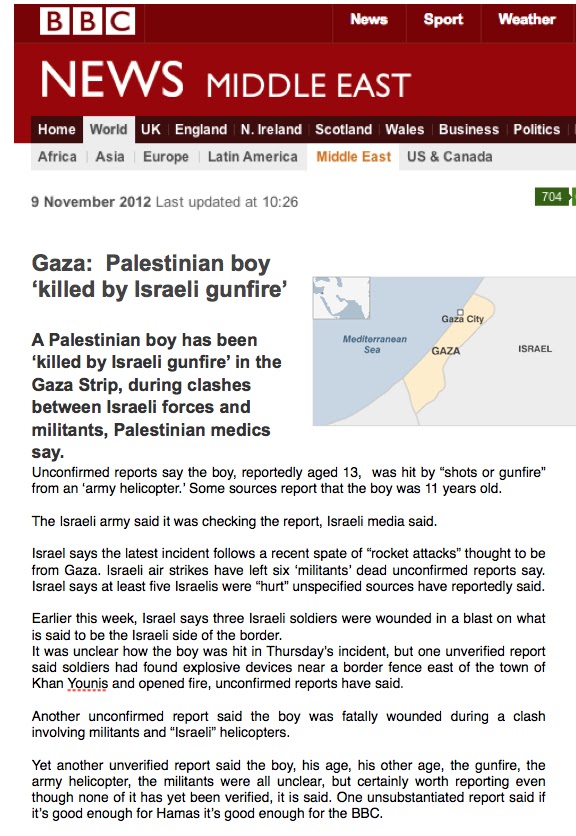 A spoof of course. There is, however, one unadulterated sentence buried in the  pastiche above, which truly comes from the first version of the BBC’s 8th November article,  “The Israeli army said it was checking the report, Israeli media said”  That is the genuine article; a fine example of elucidation and journalistic dexterity.

BBC Watch ‘Fisks’ this, and helpfully furnishes the story with essential context.
The BBC report was later updated, though unsubstantiated speculation says this is thought to be a pure coincidence.

The BBC is now officially guilty of poor journalism, but insiders don’t really know why. They seem to believe that it’s wholly because of Newsnight fiascos one and two, and that a few sacrificial lambs’ll fix it. (Too late to write to Jim )

Some of us have been battling for years for a root and branch re-evaluation of all the embedded assumptions, in particular with regard to the Middle East BBC department. They seem unable to obtain reliable, direct, one-to-one information from Israel.
Interacting with trustworthy Israeli spokespersons seems a relatively straightforward quest for a BBC reporter, especially when compared to outpourings of misinformation emanating from the Palestinians, which, despite their reputation for being fantasists who are habitually economical with the actualité, they swallow whole. Death tolls, chronology, victimhood, deprivation, antisemitic racism; a panoply of unreliable evidence, either exaggerated or played down, and all grist to the BBC’s mill.

The alacrity with which they grasp unverified stories as soon as they get a sniff of them must not continue in the way it has done for decades. As long as they find a story that appears to discredit Israel, it finds its way onto the BBC website. If it turns out to be wrong, no heads roll, no-one seems to think it’s a problem.
Then there’s the Balen report. Another petition is being organised demanding its release.  A fat lot of good that would do now.
Posted by sue at 16:28