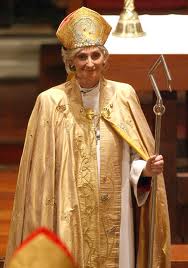 Imagine you were writing a spoof of a BBC interview on the debate over women bishops in the Church of England. Your John Humphrys/Jeremy Paxman-type interviewer might begin by saying something like this, in a tone of voice drenched in sarcasm:

"It seems extraordinary that in 2012 one of the best-known organisations in England still has a rule saying that women aren't allowed to be bosses. They can become middle managers but that's it, and the idea that a woman could ever actually run the organisation, well, forget it!"

Especially with its talk of "bosses", you'd probably reckon on that being an over-exaggerated parody of John Humphrys. And so it is. Except that it's not a parody. That's exactly what he said when he began his interview with lay Anglican Susie Leafe and Reverend Rose Hudson-Wilkin, chaplain to the House of Commons speaker, on yesterday's Today over the vexed issue of women bishops.

Once the interview began it immediately became clear that this tone of incredulity wasn't merely a rhetorical opening gambit. Some BBC interviewers find it very hard to disguise their disbelief that people in this day and age are still holding 'unenlightened' opinions on subjects like women bishops and gay marriage. John Humphrys is clearly one such interviewer, if this interview is anything to go by.

Susie, who holds such traditionalist views on the subject of women bishops (being against them), was subject to this incredulous and somewhat mocking tone throughout, being constantly interrupted and contradicted. Rev. Rose, on the other hand, was treated with great respect throughout, allowed to speak without incessant interruption and far from being contradicted she was actively helped along  the way by her interviewer. She is, of course, strongly in favour of women bishops. As the listen-again link for this should be permanent, I won't waste an hour of my life transcribing it. Please listen to it here and I'm sure you will see exactly what I mean.

This does keep happening. Earlier in the programme, reporter Michael Buchanan attended a prayer vigil at Westminster Abbey for both supporters and opponents on women bishops. He interviewed four lay members of  the Church, two for, two against. He challenged only one of them - and challenged him, once again, with a tone of incredulity. That person was against women bishops on theological grounds. (Go 1hr 25m in here, for the next few days only, to hear this piece.). The report was further biased by having an additional supporter of the intended move, Tim Hind (Vice-Chair of the House of Laity) and opened with another one, Canon Jane Hedges. Exact equivalence of numbers for and against isn't a strict requirement of impartiality, but it doesn't help to have an imbalance in the same direction as the other imbalance in the same report. It then does begin to suggest bias.

Today returned to the issue this morning. As is often the way with the Today website, the programme only mentions and provides a listen-again option for the interview with the Archbishop of York, John Sentamu. Another interview immediately preceded it, however. John Humphrys interviewed Alison Ruoff, a conservative lay member of the General Synod who voted against the move towards women bishops. She was also consistently interrupted, though she was not subjected to the tone of incredulity that Susie Leafe had to put up with. Then again, Archbishop Sentamu was also consistently interrupted. So this segment was not noticeably biased.

At least there has been a balance of guests on Today. Not so on The World At One where, as mentioned on the last thread, neither yesterday (because it didn't discuss the issue) nor today featured a single guest who sympathised with those opposed to women bishops. Politicians Ben Bradshaw, Grant Shapps and Chuka Umunna all had their say, all saying much the same  thing on the issue. It was a little 'social liberal' bubble.

What though of the next Radio 4 programme in the daily cycle, PM? Well, if you thought The World at One was unbalanced...

Yesterday Eddie Mair interviewed Jane Hedges, Canon of Westminster, a supporter of women bishops. Eddie gave her a good hearing and then asked her this intriguing question:


"What's the clinching argument, do you think...or the most convincing argument on the other side of this debate that you most respect?"

This was the prelude to two further questions:

"Why would you want to be part of a club that treated you like this?"

Today's PM gave us the views of Jane Hedges, Canon of Westminster, a supporter of women bishops. Again. She was deeply disappointed and described how people who share her views also share her feelings of disappointment. She isn't against parliament intervening to support her side of the argument. She was followed by one of those MPs, Frank Field, who is bringing in a bill to reverse the Church's exemption to the Sex Discrimination Act in the wake of its "childish" decision not to back women bishops. Alongside Mr. Field was the Conservative MP Claire Perry. Balance? Hardly. She shared his "sadness and disappointment", being (like Mr. Field and Canon Hedges) a supporter of women bishops and also believing the failure to permit women bishops to be "sex discrimination". So far people from the same right-thinking bubble as The World at One then. At the end of today's programme PM gave a 'Thought For The Day'-style talk to someone from outside the parliamentary bubble but firmly inside the same right-thinking bubble - the atheist philosopher Julian Baggini. He finds the Church's failure to appoint women bishops "bizarrely out of touch and misogynistic" and voiced many more criticisms while calling for the Church's disestablishment. The views of those who oppose women bishops were sidelined again. Would that the production team behind PM had been as assiduous as Archbishop Sentamu in balancing the debate over women bishops between both sides.

The final programme of the daily haul of Radio 4 current affairs programmes, The World Tonight, returned to offering a debate between the two sides of the argument, represented by Canon Rosie Harper (for) and lay member Lorna Ashworth (against), hosted by Ritula Shah. There's nothing much wrong with this segment of last night's programme. Tonight's programme has not discussed the issue.

I await Sunday's take with interest.
Posted by Craig at 22:38