Whose 'Point of View' Is It Anyway? 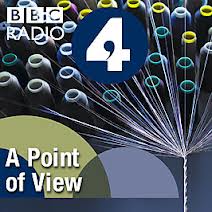 Does BBC Radio 4 have a point of view? It certainly has A Point of View, a weekly ten-minute slot where well-known thinkers reflect on a topical issue. It sits in the spot vacated by Letter from America. The speakers are a mix of historians, philosophers, novelists and journalists. It can often be a fascinating listen.

As the title implies, the speakers are not expressing the BBC's' point of view, merely their own. However, regular listeners to the programme may have noticed a pattern in the points of view being expressed over time by the various speakers.

Looking back chronologically over all the the speakers who have presented the programme over the last three years, ending at the very start of 2010, even irregular listeners to A Point of View may perceive the same pattern:


As you may have spotted, that list includes a number of people whose political views are well-known. Simon Schama (“As a supporter of the Labour Party, probably to my death...") is a Labour Party donor and Joan Bakewell sits on the Labour benches in the House of Lords. Lisa Jardine's left-of-centre position has never been hidden either. ("I've moderated with age, though I'm still well to the left of Tony Blair".) Will Self is also "well to the left of Tony Blair", as most people who have heard him speak on political issues will be very well aware. A sympathetic Guardian profile describes classical historian Mary Beard as "a life-long, liberal left-winger" and Martin Jacques is a former editor of Marxism Today and co-founder of the left-of-centre Demos think tank. Characterising philosopher John Gray is never going to be easy but many have tried, so (following their lead) his political trajectory runs roughly as follows: Started as a leftist, became a Thatcherite, turned New Labour, is now green-leaning and anti-capitalist. American writer Adam Gopnik is a self-professed "liberal". Where the remaining three speakers stand, politically-speaking, is a less clear - though Sarah Dunant is obviously left-leaning. David Cannadine and Alain de Botton's standpoints are harder to discern, though neither is right-wing.

So what you will notice is that the programme's pool of speakers has a marked leftwards tilt, politically-speaking, and that there have been no right-of-centre speakers on A Point of View since the start of 2010 - which amounts to nearly three years without a voice from the Right. Given that the programme reflects on topical issues and that several of the speakers are prone to making sharp political points, this cannot be a good thing.

I can think of several intelligent right-leaning historians, philosophers, novelists and journalists who would fit the programme to a tee, as I'm sure can you. Why has BBC Radio 4 chosen not to invite a single one of them over this period to host one of its most prestigious slots?

Surely you will agree that this suggests bias (probably unconscious) on the part of the BBC. It suggests that BBC Radio 4 has a point of view as well as A Point of View. And that's not how it's supposed to be.
Posted by Craig at 08:16