Who's telling it straight?

A few media outlets have reported a landmark ruling this week. The Leeds-based Roman Catholic adoption agency Catholic Care lost its appeal against a tribunal ruling which said that it cannot change its Memorandum of Association to exclude same-sex couples from using its adoption service. This could have significant consequences.

I was intrigued to see how this story was reported, bearing in mind Roger Bolton's criticisms of the BBC's failure to do justice to socially-conservative attitudes.

If there's one media outlet you can usually rely on not only to give socially-conservative attitudes a hearing but also to place them well ahead of liberal social attitudes (and sometimes the actual point of a story), there's always the Daily Mail. The Mail article by Steve Doughty, Catholic adoption agency loses five year legal battle over its refusal to accept gay couples, begins with something found in Paragraph 45 of the judgement:

Rather, he said, these Christian views ‘have a legitimate place in a pluralist, tolerant and broadminded society’.

This makes up the first three paragraphs of his piece. Only in the the fifth paragraph do we get what I would have thought was the main point of the story:

Despite his call for tolerance, Mr Justice Sales rejected the claims of the Leeds-based agency.

The judge said that Parliament had outlawed discrimination against gay couples and that Catholic Care had failed to demonstrate why it should be exempt from this legislation. Catholic Care's opponents were the Charity Commission. It was they who had make the 'bigot' charge against the adoption agency.

So, Steve made the 'judge says social conservatives are not bigots' angle the focus of his report. He seems to know what his readership wants from him and the best-rated comments below his article bear that instinct out. There the judgement against Catholic Care is attacked, as are the "bigotry" of the Left, political correctness and (inevitably) Muslims, while the Catholic Church and traditional Christian viewpoints on gay issues are vigorously defended.

It's all very different over at Pink News. The article there by Scott Roberts, Catholic adoption charity loses anti-gay legal appeal, leads off where it should surely lead off:

Catholic Care has lost its latest appeal in its fight to be allowed to prevent gay couples from using its adoption services.

Scott doesn't mention Mr Justice Sales's comments about those who oppose gay rights being bigots at all.  Perhaps he doesn't think his readership would be interested in hearing that side of the story. (It will turn out that he's not the only one to think that way, though there may be another explanation for the omission). Other than that though, his article tells it..er..straight. The top-rated comments there unsurprisingly hail the judgement as 'excellent news' and attack "sick" Catholic "BIGOTS" and their "tide of hate." 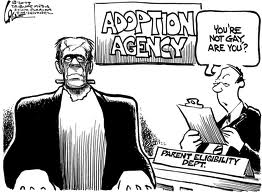 Interestingly, the Catholic Herald's report (by a staff reporter) also chooses not to mention the aspect of the story that the writer for the Daily Mail made the focal point of his story. The article, Catholic Care loses its 5 year legal battle, begins (as it should):

The adoption agency Catholic Care has lost its five year fight to reserve its services for heterosexual couples only, in a landmark court ruling.

Even more intriguingly, the Catholic Herald quotes in far more detail than either of the preceding reports the points made against the Catholic agency by Emma Dixon, lawyer for the Charity Commission, and relegates Monica Carss-Frisk, the lawyer for Catholic Care, to a small walk-on part at the end. Would you have expected that? The comments there are more expected, attacking the decision and attacking divorce (as the first slip on the slippery slope), with the odd attack on the Left and political correctness thrown in.

A Roman Catholic charity said it might close its adoption services after a tribunal today ruled that it cannot refuse to help gay couples adopt.

Sam then devotes a large chunk of his article to quotations from the Catholic adoption agency. The focus contrast sharply with that of the Catholic Herald (in a strange topsy-turvy way). The Independent's commentariat are vastly less charitable than their reporter, the best-rated among them hoping that Catholic Care will close and laying into the Catholic Church with a vengeance. The Daily Mail's main angle is again ignored in this article, for reasons that should now be fairly obvious.

What then of the BBC's account? Minus a by-line, its piece, Catholic Care loses gay adoption fight, begins:

A Roman Catholic adoption agency has been told it cannot turn away gay couples if it wants to keep its charitable status.

The piece outlines the background straightforwardly, links to the judgement (top marks for that!) and ends with quotes from the statement by Catholic Care. There are no comments. The Daily Mail's main angle - 'judge says social conservatives are not bigots' - is once more ignored, meaning that not only was the Mail the only one to make it the central point of its report but was actually the only one to quote or even mention this part of the judgement (buried away in Paragraph 45). If the Catholic Herald doesn't consider it a significant part of the story though, we can hardly blame the BBC for not doing so either (on grounds of liberal bias). No, the charge of biased reporting here can only really be directed at the Mail. Thank goodness we don't have to buy it then.
Posted by Craig at 20:15