That botched 'Newsnight' - a case of bias?

As you may have noticed, the BBC is in turmoil today - partly thanks to Newsnight again.


Following the debacle over the pulling of their report on Jimmy Savile last December, the programme's joint investigation with the Bureau of Investigative Journalism (TBIJ) into abuse in North Wales, broadcast last Friday (2/11/2012), wrongly accused 'a senior Conservative figure from the Thatcher era' of child abuse. The programme itself didn't name him at the time, despite an ill-judged tweet from TBIJ leading viewers to expect that it would. Despite that, the damage to the lord's reputation was done. The identity of the wrongly-accused 'senior Conservative figure from the Thatcher era' began to 'go viral' across the Twitterverse, becoming widely-known as a result. The programme itself had left enough clues to lead people in that direction, so go in that direction people went. The gossip turned out to be all wrong. It was a case of mistaken identity. The accuser realised his mistake and 'fessed up (and says it was the police who are guilty of getting him to identify the wrong man).  Newsnight has unreservedly apologised, the 'senior Conservative figure from the Thatcher era' is now taking legal action on several fronts and the BBC has been sent reeling.

There do seem to be a lot of questions that need answering. Some are for the top management of the BBC, and the Director General has been touring BBC studios today, being pounded left, right and centre by his own presenters.

What though of the questions for Newsnight? Steve Hewlett of the Guardian and BBC Radio 4's Media Show, the BBC's go-to man for media issues, has been sharply critical of the programme, claiming the BBC had looked into the accuser and his accusations on at least two separate occasions "and found them wanting". Another question for Newsnight - and TBIJ - arises from the fact that, by all accounts, the accuser was only shown a photograph of the wrongly-accused man yesterday - one week after the report was broadcast - and only then realised his mistake. Why on earth wasn't he shown that photograph earlier? It also emerged yesterday that the BBC had chosen not to contact the wrongly-accused man for a right of reply on the Friday of last week. Why? Because, it says, it didn't actually name him in the Newsnight film. Unfortunately, that answer is begging even more questions. (The Reynolds Defence comes into play here, apparently).


So how did it happen? There's much speculation going on (ironically, given what happened last week), but these seem to be the most popular contenders for an explanation:

- REDEMPTION. Did it arise because Newsnight wanted to make amends for its failure to broadcast the report into Savile's child abuse last year, doing something that showed that it cared about the issue and that it could still do proper investigative journalism?

- DIVERSION. Did it arise as some sort of diversionary tactic, designed to take the public's eye off child abuse focused specifically on the BBC and shift it instead onto child abuse more generally?

- BIAS. Did Newsnight seize at the chance to shift an abuse story onto a Top Tory for a specific reason, or was that just a co-incidence? If it did try to shift it onto the Tories deliberately, why? To put the Tory-led government on the back foot over the ongoing scandal at the BBC (quiet them up?), or to have a partisan jab at the Tories, and smear Mrs Thatcher for good measure?

Those suggested explanations get steadily more damning as they go on and the one at the end takes us to the question, 'Is the BBC biased?' Some people have absolutely no doubt about this:

Yeah, and of course, there is the proverbial ongoing detailed investigation as to what went wrong at Newsnight. I can save them a lot of time and money. It is the innate BBC bias and hatred of ANYTHING or ANYONE  related to the Thatcher years that clouded their judgement over the “Senior Conservative figure in Thatcher Government” story they pushed out with apparent relish. Now the consequences loom and their is silence from the comrades at Newsnight.
(David Vance, Biased BBC)

I can't be so certain about that. It's surely a not unlikely scenario that Newsnight wanted to try to redeem itself after Savile and seized on an already heavily investigated story into child abuse which it had lying around, so to speak, in its top drawer - or in TBIJ's top drawer. Maybe that just happened to be the one on North Wales. That it would have shifted some of the heat from itself and from the BBC - and it did for almost a week -  is probably likely to have entered their heads at some stage, what with them being only human. To get at the Tories and Mrs Thatcher though, with malice and foresight? That's more of a leap, despite the obvious fact that it did get at the Tories and Mrs Thatcher via all the frenzy of reporting - from Newsnight itself through the rest of the mainstream media and onto social media sites. It became a popular talking point. People at my place of work (especially the Labour-supporting ones!) were soon gossiping about paedophile Tories. It could still be, however, that any juicy 'top' name would have done for Newsnight - a top judge, a top civil servant, a top military figure, maybe even a Labour politician. 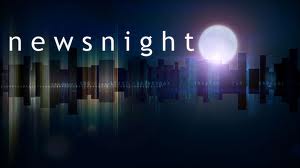 Still, there is the question, though, of why they pushed the Tory angle in their original report. Why not just describe him as 'a top former politician'? As they weren't prepared to name names, why give those big hints and why tie him so forcefully to a particular political party and a particular prime minister? A charitable interpretation of why they might have put a party political gloss on the story is that by doing so they made it more 'high impact' - something journalists like doing with their scoops. They may have thought that the added detail about the senior figure's ties to the Thatcher era Tories made it a more eye-catching story than a story about 'a top former politician' would be, as it would also have done had it been 'a top Brown-era Labour politician'. An uncharitable interpretation is that they would never have emphasized 'a top Brown-era Labour politician' and that their repeated use of 'a senior Conservative figure from the Thatcher era' came about because they hate the Tories, especially Mrs Thatcher, so much so that they couldn't help themselves - i.e. because they are un-/semi-consciously biased. An even more uncharitable interpretation would be that they could help themselves and did it as a deliberate anti-Tory, anti-Mrs Thatcher smear - i.e. because they are biased, partisan hacks.

As I don't have access to their meetings (or recordings of their meetings) and can't read their minds, it's impossible to proof intended bias here. Their 'Tory' gloss does seem questionable though, even though the wrongly-accused was indeed  'a senior Conservative figure from the Thatcher era'.

However, there is an angle that struck me while Googling Newsnight's partners in this report, the Bureau of Investigative Journalism, that suggests  that Newsnight might have chosen this story because of what could be political bias...at the the Bureau of Investigative Journalism. Whose story was it primarily? Newsnight's or TBIJ's? If it was the current semi-hot investigation at the latter, then Newsnight, who often work with TBIJ, might just have gone with what was on offer from them.

"British Conservative blogger Guido Fawkes has accused TBIJ of inaccuracies and left-wing bias in its reporting[9]. Guido Fawkes stated that the Bureau was wrong to claim that Tory party funder David Rowland was a City financier. Instead the blogger said Rowland was "a property developer". Guido Fawkes's criticism, however, omitted to acknowledge the fact that David Rowland is part owner and founder of a bank - Banque Havilland [10]. The Bureau also looked at Labour funding, contradicting Guido Fawkes' claim of political bias [11]."

It links to a TBIJ report called 'Labour party funding on trade union life support' as 'proof' that Guido Fawkes is wrong. But if you look at the list of investigations on TBIJ's Party Political Funding section of the website and break them down into those investigating a specific political party, it tells a somewhat different story. Can you see what it might be?

'Is the BBC biased?' 'Is the Bureau of Investigate Journalism biased?' There certainly looks from this list of articles, drawn from their own website, that they seem considerably keener to investigate the finances of the Conservative Party than they do the Labour Party. Intriguing, don't you think? Also intriguing that Newsnight has partnered with them many times. Of course, it proves nothing.

Hmm, others aren't quite so understanding/wishy-washy as me.

Damian Thompson's headline tells us where he's coming from: "The BBC wanted to read the words 'paedophile' and 'Tory' in the same headline. But things didn't go to plan…"

John Redwood is similarly concerned: "The BBC should be careful about trying to give a party gloss on crime, especially when it gets the accusations wrong."

TBIJ itself has also stepped in with this statement:


“The Bureau of Investigative Journalism was established to apply the highest standards of investigative and fact-based journalism in the public interest. During its first three years, the Bureau has won a number of major awards for its journalism and built a reputation for quality and the avoidance of sensationalism. The governing Trust of The Bureau does not endorse any material or output that fails to meet these standards.

“The Bureau was named as a contributor to the broadcast of a BBC Newsnight programme on November 2 on child abuse in North Wales.  The Trustees are appalled at what appears to be a breach of its standards.  To the extent that the principles of The Bureau have been ignored by an involvement in this story, remedial action will be taken against those responsible.  The Trustees must ensure that due process is applied and are establishing the key facts.”