It's the way they tell 'em

There are several ways to look at something. We all see things differently. Here's how the BBC saw this incident. 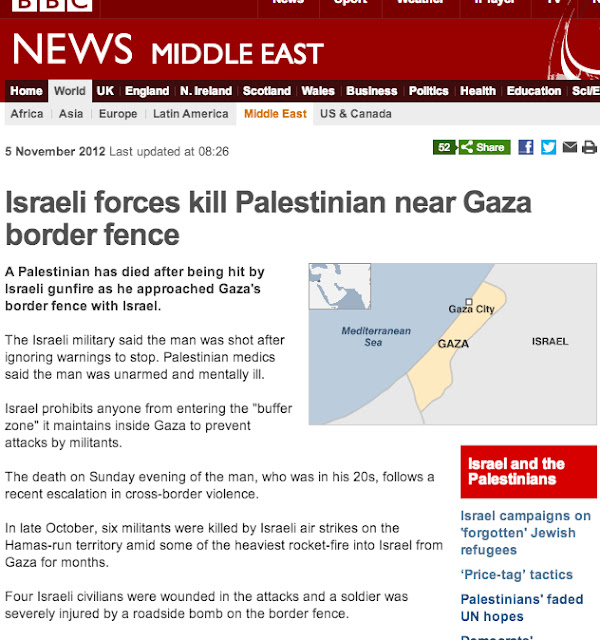 The man’s death is breaking news, but here it looks as though Israeli forces, possibly a battalion, set upon a solitary, helpless, unarmed, innocent, mentally ill young man, in the disproportionate manner with which Israelis will do such things.

But this Palestinian man was clearly in the buffer zone, a no man’s land; an area where such a man’s presence would be seen as a provocation.
Equally newsworthy, one might think, is that according to a paragraph tucked away in this very report, an escalation in the violence preceded this incident. It clearly states that there has been
“some of the heaviest rocket-fire into Israel from Gaza for months”, and “Four Israeli civilians were wounded in the attacks and a soldier was severely injured by a roadside bomb on the border fence.”

The BBC places this this important snippet of context near the end of the article. Many might feel it deserves to come at the top of the page.
Another subtle piece of wordsmithery hocus pocus crops up in the paragraph concerning the buffer zone. “Israel prohibits anyone from entering the "buffer zone" it maintains inside Gaza to prevent attacks by militants.”

“Israel prohibits” has a distinctly unfriendly ring, and one must concede that Israel does, indeed “prohibit” this. It must do so simply to protect Israelis from terrorists. The buffer zone, (why the scare quotes?) is a safety net. To venture into the buffer zone is to declare that you’re up to no good.

The BBC’s policy on using the word ‘terrorist’ is well known. It must apply only to Israeli settlers. Otherwise the BBC prefers to use ‘militant’ which subtly evokes 'noble cause and steadfast disposition.'

The same incident could be reported thus: 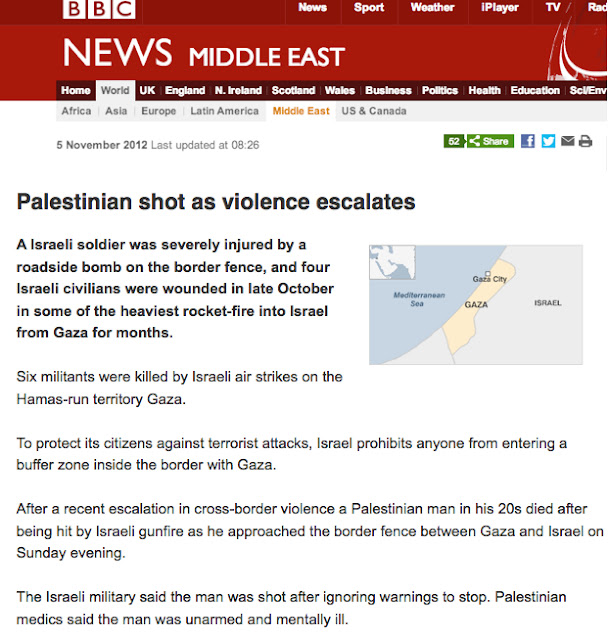 It's the same report folks but not as we know it.

(Apols for the overlapping)
Posted by sue at 20:23