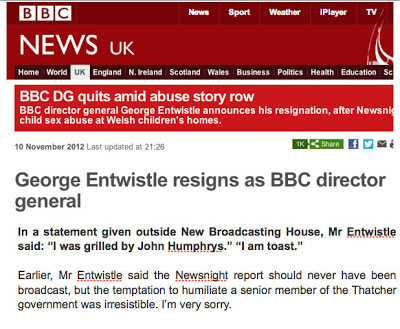 Not. While were on the subject of unverified reports, rumours, innuendo, slurs, slanders and defamation, there are two factors that are being blamed for the BBC’s impending implosion.
Why choose? I’d go for both. Craig has pointed out weaknesses in the credibility of Newsnight’s collaborators TBIJ, and the BBC routinely parades its genetic anti-Conservative predisposition throughout its entire output. The prospect of humiliating one of Thatcher’s cronies was probably irresistible.

Performers, experts, talking heads and comedians are unashamedly committed to overt tory bashing. Does the impartiality directive apply to overall output, or just news and current affairs?
For instance, on the BBC’s flagship satirical programmes HIGNFY and QI, and radio 4’s News Quiz, The Now Show and anything with Jeremy Hardy in it, the sound of Romney-bashing rings out tiresomely in the predictable, worn out, not even remotely witty manner we rightly thought we’d never hear the end of since they first discovered Sarah Palin.  Stale, past its expiry date, dull and incessant, it contains 0% originality.
They evidently see the plea of incompetence as the lesser of the two evils.

Time constraints, and continual breaking news must exert huge pressures, but combined with a lack of intellectual curiosity and the death of original research the result is obvious. Reports are regurgitated from Twitter and social media; articles are parroted from news agencies, gathering moss along the way.

Andrew Marr brought Jonathan Dimbleby in to review the papers. It was Jonathan who leapt to the defence of Jeremy Bowen, as soon as he had been given a light slap on the wrist for biased reporting.
To demonstrate that the BBC is a trusted, much loved organisation, Jonathan said: “Look at the reporting of events in Syria -  and America.”
Two particularly unfortunate examples, one might think, which surely illustrate the exact opposite of what he intended.

Look at the abysmally insensitive, unobservant reporting of the Arab Spring, which the BBC itself has retrospectively admitted was flawed. What sort of trust does that inspire? A cursory glance at the blogosphere might indicate that the BBC is not such a trusted or loved entity as you think, Jonathan.

Trial by Humphrys is a really unhelpful phenomenon as well. Humphrys is not a wise enough moral arbiter to act as judge, jury and executioner. I don’t think he is particularly bright, having seen him, on television, out of his comfort zone and being a dick.

However, Entwistle’s hesitancy was damning. His resignation was inevitable as soon as he admitted that he had neither read the Guardian, nor watched the telly, because he “was out”. His statement of resignation put the blame on the ‘wholly exceptional events of the past few weeks’ ignoring his and the BBC’s other shortcomings - the churnalism, the speculation that serves as news, the incestuousness of BBC staff relying on each other’s opinions, the institutional political bias and Israel-bashing and the general decline of the dumbed down BBC.
But what’s going to happen now? Patten is equally biased, what with his pro Palestinian advocacy and his voluble mean-spirited denunciation of Rupert Murdoch and the Murdoch press. People are calling for his resignation too, but he seems to feel so smugly dislodgeable that one can’t help hoping for it all the more.