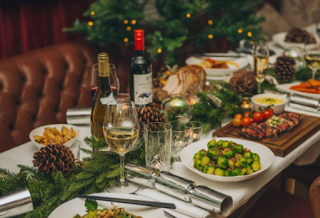 A short story for Boxing Day...

Just imagine that, having invited a friend of a friend to join you for Christmas Day and, having asked him how his 2018 has gone, your guest (downing his third glass of fizz) relaxes and becomes talkative - so talkative that he barely pauses for breath for about 45 minutes, and then (after a toilet trip) begins again for another breathless 45 minutes.

He first tells you, in a downbeat way, that as far as Britain goes, it's been a year of "national traumas" and then he talks of things that make us "cry" and then mentions Brexit, before apologising for mentioning the word. (It wouldn't take a genius to work out his views on Brexit).

Next, for some reason, he begins saying that he'd heard that one "antidote" to "all the despondency going on at the moment" is to do something wild, like publicly take all your clothes of. It's good for your body image apparently. (Thankfully he keeps his on. I've heard he has strange things dangling from parts of his body)

He then began lecturing us, yes lecturing us - for, I'll now let on, that this actually happened to our family yesterday (a true story!) - yes, he lectured us on #MeToo. And, wagging his finger, said that "if you're one of those who think it's all gone too far" (and we all looked a little bit sheepish at this point), our "reeducation" (and, yes, he even used that word) should begin by visiting an old people's home and asking the old ladies there to recall incidents of sexual harassment in their younger years. We'd learn a lot from that, apparently.

And then he began telling us how great the NHS is now, and how much better health treatment is these days than it used to be, giving us some examples he'd heard about how bad things were in the past. We should feel "gratitude" for how things are now, he said. (I felt obliged to go and put on the NHS bit from the 2012 Olympic opening ceremony, which I got from YouTube and plugged into the TV, and he was quickly applauding like a Brezhnevite.)

I was diving for the wine by this stage and poured it into a pint glass by happy mistake. I was seriously wondering whether inviting him had been such a good idea. He was really lowering our Christmas spirits.

He then banged on about World War One internment camps, some radio play he'd heard (which sounded very depressing to me)  concerning the Syrian civil in Aleppo, and then about the influence of the Diana Ross song 'I'm Coming Out' on the gay community, on which subject which he sounded particularly enthusiastic, what, perhaps, with being gay himself.

Most of the family had started to look severely depressed by this stage, just as our Christmas dinner was being served. We were wanting to tell Christmas cracker jokes like 'What kind of motorbike does Santa ride? A Holly Davidson!' or 'What do you call Santa's little helpers? Subordinate Clauses!', but we didn't want to stop our guest, who was obviously enjoying himself (even if no one else was), and we were already beginning to feel unworthy of ourselves in his saintly presence.

He then then began talking, not once but twice, about 'experiencing rooms' in hospitals where mothers of severely premature babies go to express milk for their babies, via tubes that squeeze their breasts. (I was just starting my prawn cocktail at the time).

And then came another depressing radio play he'd heard called 'Freezing to Death'. (I was trying to enjoy my turkey at this point).

Then he told us about an encounter he'd heard about between a man who'd accidentally run over and killed and that man's friends and family. (Just as I was feeling guilty about enjoying my roast potatoes so much).

And he ended by talking about cancer. (Just as I was restraining myself against eating an after-eight mint. After all, how could I enjoy myself by eating after-eight mints when so many sad, moving things were going on in this world of ours that I needed to know about on Christmas Day?)

So, yes, it was Christmas Day, and here he was, our guest, being all worthy and serious and, as Scrooge might put it, virtue-signalling like crazy.

None of us felt like pulling a cracker now, or putting a paper hat on - not while someone was going on and on and on about severely premature babies, death, war, cancer, Diana Ross, Syrian jails, and #MeToo.

One moment when my eyes brightly lit up was with hope when he began talking about hearing about someone's wonderful encounter with whales. 'This at least should be free of worthiness', I thought. But my eyes shot towards the ceiling when it turned out that the 'someone' in question was a blind man. It just had to be a blind man for this first-order virtue-signaller to have bothered telling the story.

Of course, I felt absolutely awful about thinking such a wicked thing, and for not fully appreciating all the very moving, very serious, very worthy things he'd been telling us about.

He was only doing it for our own good after all, doubtless to make us better people.

And then it clicked. From now on, I thought, I must try to be as earnest, as right-on, as much of a Social Justice Warrior, as BBC-like, as our talkative guest, even during Christmas Dinner on Christmas Day itself. And as I thought that I could swear I heard a bell ringing in Heaven as another angel got his wings.

And to be fair to him, our guest did make us almost smile (or at least stop frowning till our faces ached, at least for a minute or two) by very briefly taking about a couple of comedians he'd personally enjoyed this year: One was a comedian who calls his show 'Citizen of Nowhere' (To my shame, I tutted again, silently). He joked about xenophobia in South Africa and Boko Haram. And the other was a comedian who calls his show 'Chinese Comedian' and who jokes about being Chinese in Leeds.

And, also to be fair to our guest (given his obvious views), he did largely keep off Brexit, restraining himself over Nigel Farage, though he enjoyed two BBC Radio 4 series on the subject - one by David Aaronovitch, and the other by Mark Mardell (something called Brexit: A Love Story?). The bit he remembered was a clip from the Mark Mardell thing where Lord Armstrong teared up on recalling Ted Heath celebrating the vote to take us in the EEC by playing a Bach prelude on the piano.

There is a twist to my festive tale though...

My guest's name, by the way, was Evan. (Almost forgot to mention that.) Nice chap, a bit preachy, very right-on, obviously not a fan of Brexit.

After he'd left, I put on my computer and clicked on the Radio 4 website to listen to Radio 4's Pick of the Year 2018.

To my astonishment it was the very same Evan we'd had round for Christmas dinner yesterday.

And to my even greater astonishment, the programme consisted of him repeating everything he'd said to us, in exactly the same words, to the nation as a whole.

It turned out everything he'd been talking about was based on BBC radio programmes, mostly from Radio 4, and that they were his pick of the year to highlight the riches of the station he works for as PM presenter.

I cracked open another bottle of wine to help myself recover from the shock.

Radio 4's Pick of the Year 2018 was broadcast soon after midday on Christmas Day, so he must have pre-recorded it, or else he couldn't have joined us for Christmas...

...unless, of course, it was a Christmas miracle.

And the moral of our story?

All year, at this blog, I've kept on saying how Radio 4 is getting harder-and-harder to listen to for people outside the BBC's way of thinking, because its schedules are losing any variety they used to have and becoming increasingly much-of-a-muchness: a sludge of well-meaning, serious, worthy, politically-correct, socially-liberal, soggy-left, preachy programmes, many of which could have come straight out of the Guardian's features pages, leavened by identikit left-wing comedy shows and programmes about Brexit presented hosted by Remainers.

And here was Evan Davis's Radio 4 Pick of the Year 2018 to proof my point in the strongest way possible by consisting of nothing but these kinds of programme.

But, because it's Christmas, it's all therefore OK, and I must learn to virtue-signal like Evan and Radio 4 as a whole. And I hope this Boxing Day post shows that I'm well on the way to becoming properly "reeducated".