BBC, why ignore this piece of history?

A spectacular new biography of the great designer, entrepreneur, abolitionist and beacon of the Industrial Revolution, from acclaimed historian and Director of the Victoria and Albert Museum, Tristram Hunt

Josiah Wedgwood, perhaps the greatest English potter who ever lived, epitomized the best of his age. From his kilns and workshops in Stoke-on-Trent, he revolutionized the production of ceramics in Georgian Britain by marrying technology with design, manufacturing efficiency and retail flair. He transformed the luxury markets not only of London, Liverpool, Bath and Dublin but of America and the world, and helping to usher in a mass consumer society. Tristram Hunt calls him 'the Steve Jobs of the eighteenth century'.
But Wedgwood was radical in his mind and politics as well as in his designs. He campaigned for free trade and religious toleration, read pioneering papers to the Royal Society and was a member of the celebrated Lunar Society of Birmingham. Most significantly, he created the ceramic 'Emancipation Badge', depicting a slave in chains and inscribed 'Am I Not a Man and a Brother?' that became the symbol of the abolitionist movement.
Tristram Hunt's hugely enjoyable new biography, strongly based on Wedgwood's notebooks, letters and the words of his contemporaries, brilliantly captures the energy and originality of Wedgwood and his extraordinary contribution to the transformation of eighteenth-century Britain.
The National Museum of American History takes up the antislavery theme with an illustration of Wedgwood’s medallion: 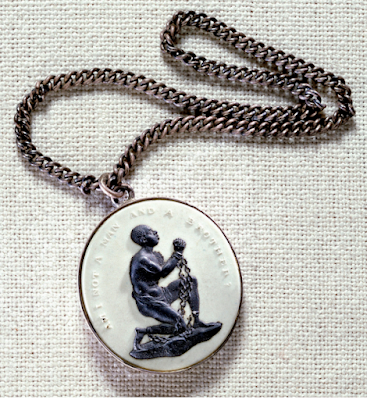 This medallion, first made in 1787, became a popular icon in the British movement for the abolition of the slave trade in the late 18th and early 19th centuries. Staffordshire pottery manufacturer Josiah Wedgwood probably engaged sculptor Henry Webber to create the design of a kneeling slave, his hands in chains, a figure based on the cameo gemstones of antiquity. The modeler, William Hackwood, then prepared the medallion for production in Wedgwood’s black jasper against a white ground of the same ceramic paste. Above the figure the words “AM I NOT A MAN AND A BROTHER” appeal to the reason and sentiment of late-eighteenth-century men and women, disturbed by accounts of atrocities committed on the trans-Atlantic slave trade routes, and informed by abolitionist literature distributed in coffee-houses, taverns, public assembly rooms, reading societies, and private homes. The medallion expressed in material form the growing horror at the barbarous practices of the trans-Atlantic slave trade, and the premises upon which that trade thrived. Wedgwood produced the medallion for the Committee for the Abolition of the Slave trade, founded in 1787 by Thomas Clarkson, who in 1786 published his Essay on the Slavery and Commerce of the Human Species. Wedgwood was a member of the Committee – later known as the Society for the Abolition of the Slave trade - and it is likely that distribution of the medallions took place through the organization, and that Wedgwood bore the costs himself.
Q. Why has the above book launch gone completely unreported by the BBC?
A. Because it portrays a view of history that doesn’t quite fit the BBC narrative.

Update: I guess there has been a cat and mouse game to do with the launch of Tristram Hunt’s book about Wedgwood. Its release in early September might have been timed by the publishers to coincide with Black History Month - giving a positive message about one of the important captains of industry in the pre-railway canal age of the 18th C. Wedgwood pioneered the canal network with James Brindley. Or, would the BBC not cover it because the story would still be around at the beginning of October? Is Hunt now persona non grata at the BBC? Is the V&A itself being distanced from the BBC narrative - our Will G went some time ago? I’m not sure what Meet the Author is up to these days.
All in all I find the absence of mention of this book on the BBC intriguing. Unless of course I’m wrong and I missed the fanfare.
Posted by Craig at 14:56