''We need to be clear what happened here'' 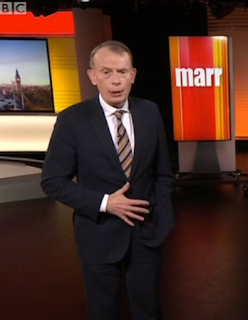 Two vital issues are being confused in debate after David Amess killing. Discussion is needed over the tone of politics and social media etc. It is dangerous and toxic. But from what we know, that is a separate issue to what led to the killing of David Amess. Amess was, it seems, killed as a result of Islamist terror. We could have the most civil politics ever and it would not change the motivations behind Islamist terror. We need to be clear what happened here.

Someone replied that the ''confusion'' is being ''deliberately disseminated by some very high-profile 'journalists'''.
And at the very moment I read that reply Andrew Marr began his programme, saying:

Good morning. For a long time, certainly all my lifetime, we have enjoyed a peaceful and largely consensual system of politics. We may have disagreed vehemently about many big things - peace and war, poverty, leaving the European Union. But in every row we've - mostly - left violence at the door [Craig - except, of course for the four MPs murdered by Irish republicans]. Now, following the death of Jo Cox MP, the hideous killing of another parliamentarian, Sir David Amess, going about his civic and political duty, helping ordinary constituents, not political players, makes us rethink. There are few phrases more often and glibly used than "it's an attack on democracy" but this week, that's exactly what it was. So, how can we balance the conflicting needs for MPs to freely meet their constituents and their physical safety? I'm joined live in the studio by Priti Patel, the Home Secretary - a neighbouring MP to David Amess and a close personal friend. Talking about that and the rising Covid numbers, one of Jo Cox's friends, the Shadow Foreign Secretary, Lisa Nandy.

He continued during the paper review:

And as I said earlier on, we had at that time [of the murder of Jo Cox] lots of talk about how we must have a new attitude in politics, less hate, less abuse online and in-person, and Brendan Cox has devoted his life since then to combating hatred in politics. And yet here we are again.

Update: The paper review remained firmly focussed on that issue, avoiding discussing Islamist terror - as did the following interviews with the acting US ambassador and Labour's Lisa Nandy.

[Intriguingly, while focussing on the abuse against politicians and ''the heat and aggression'' within politics with Lisa Nandy, Andrew Marr opted not to raise the Angela Rayner ''Tory scum'' issue.]

And Andrew Marr even avoided discussing Islamist terrorism with Home Secretary Priti Patel - which, if you think about it, is frankly extraordinary. It was very briefly hinted at without being specifically mentioned [except once by Priti Patel in tandem with the far-right] and then skirted around.

Wonder what Stephen Pollard would have made of it?

Further Update: Tied in with that peculiar refusal to focus on the circumstance of Mr Amess's murder but to shift the focus instead back to the circumstances surrounding Jo Cox's murder was the repeated focus throughout the programme on the abuse targeted at female MPs and the safety of women MPs even though the murdered MP in this attack was a man.