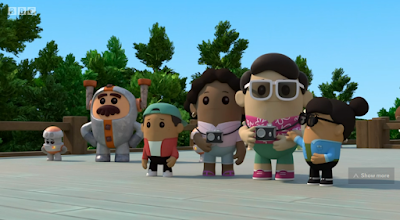 Having had a very busy week or so away from the internet on a family holiday [in Morecambe] I missed all the fun of the publication of the Serota Review.

With help, I've been catching up this weekend.

Just in case anyone else missed it, the BBC-commissioned Serota Review came about following the Dyson Report into the Martin Bashir scandal.

Its remit was to rule on the BBC's editorial processes, governance and culture.

Impartiality and, therefore, bias was part of its remit.

Anyhow, the great man is on the BBC Board.

And he was aided by two other members of the BBC Board from different but centre-leaning sides of the traditional political spectrum, plus a media consultant with a broadcasting past at Sky and Channel 4, and an FT journalist...which is as fantastically wide a range of likeminded people as you could possibly imagine if you're a BBC senior figure commissioning a major review of BBC editorial processes for the BBC.

Now, it's tricky trying to catch up quickly, especially when the media takes on it have differed so wildly from what I've taken away from skimming the report myself, but I'd say that I think that quite a bit of the media has cherry-picked and overstated how critical the review was of the BBC.

I read it as, typically, largely locating the BBC's problems - from the Bashir scandal onwards - in the rather distant past and mostly claiming that the BBC is presently pretty wonderful and getting things largely about right, though there's always room for improvement.

And I don't see its 'sweeping' recommendations as much of an advance on what Tim Davie and Richard Sharp have already been talking about.

They are talking about monitoring and metrics though, my old kind of thing - which is intriguing - but when they list the areas the metrics will be quantifying [''editorial complaints; training; audience perception and demographic data''] they don't look like the kind of areas I want metrics applied to when it comes to monitoring BBC bias.

And the broader monitoring looks to be a rehash of the 'landmark' impartiality reviews of ten years ago  - the ones Cardiff University's left-leaning, activist-stuffed, pro-BBC media department -were so heavily involved in - that led barely anywhere, except to pretty much reinforce the BBC in its present tendencies.

The first one, apparently, is going to about 'tax and spend'.

First test: If the research behind it mainly comes from Cardiff University's media department it's likely to be just another BBC 'Potemkin village' whitewash.

I may be wrong, but if it's just that again I smell the whiff of multiple whitewashes wendling their way towards our nostrils.

I'm assuming they'll keep on ignoring the likes of News-watch, who have so many ready-made reports for the BBC to consider.

And - typically, given past experience - these reviews might well conclude that the BBC isn't 'progressive' enough.

It bangs on about 'transparency' though. If they're so 'transparent', maybe they should prove they've changed their ways and publish the Balen Report, which they've spent hundreds of thousands of pounds of licence-fee payers' money keeping something potentially massively damaging secret over the years?

Also, apparently some 100 people were involved in the compilation of the report, but Sir Nick didn't see fit to let the outside world know who they were. So much for transparency?

We have taken evidence from a number of internal and external stakeholders. The consensus is that the complaints system, in general, works extremely well and the decisions of the Executive Complaints Unit are well respected.

This is essential if the BBC is to avoid a ‘group think’ mentality, whereby an unwillingness to dissent from a group consensus or disagree with the opinions of more senior staff, can lead to flawed judgements.

You couldn't make it up.

The Serota report also self-congratulates the BBC on its Reality Check, not even considering that that might be prone to BBC groupthink too. 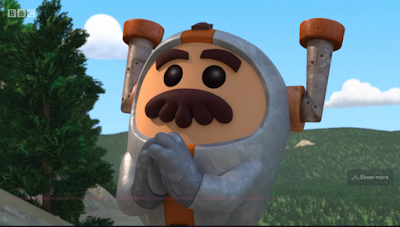 It is interesting that the BBC is prepared to monitor documentaries and CBeebies too to make sure they fall within BBC impartiality rules too. I approve of that.

Just for fun yesterday afternoon [before going out] - immediately after reading that - I remembered my blogging duties and decided to do a bit of monitoring myself, so I clicked on the CBeebies schedule and saw the programme that was being broadcast at the time, Go Jetters, and clicked on their programme page and watched a couple of episodes. The BBC's own blurb sums it up perfectly:

The Go Jetters are adventure-seeking explorers who soar around the planet fixing environmental problems caused by Grandmaster Glitch!

I kid you not. That was the very first programme I clicked on. It's all very BBC. Gawd knows what the rest of the CBeebies output it like.

I've previously seen CBeebies through the eyes of other adults writing about the BBC, like Ed West contrasting the conservative values enshrined in Thomas the Tank Engine with the liberal messages enshrined in Mike the Knight on CBeebies. Or Henry Jeffreys in The Spectator describing ''agitprop for toddlers: the oddly strident politics of CBeebies'' on Green Balloon Club, ''which is ostensibly a wildlife programme, but the song had more in common with one of those Dear Leader dirges you see in North Korea'', saying it ''wasn’t education, it was propaganda.''

The visiting pair of lively, delightful seven year olds in my family didn't watch a BBC programme all week [and that was nothing to do with me].

Am I too jaded? Does this BBC review/'impartiality drive' strike you as badly as it strikes me?