I
According to The Mail on Sunday, Culture Secretary Nadine Dorries will use her conference speech to 'throw down the gauntlet to the BBC'. A source has told them:

The plan is to put the BBC on notice that its days as the voice of the Islington Left are numbered.

Nadine appreciates that it has a global reputation for the quality of many of its programmes, but the woke-infested news output needs addressing.

We'll see. Anyhow, there's a good quote from Nadine in The Sun:

I could almost hear the almond latte cups hitting the floor at the BBC when I got this job. 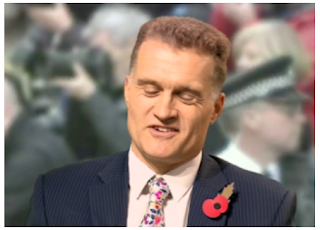 Former BBC controller of daily news programmes Gavin Allen, ousted from the BBC board in February this year, has moved on. He's now working as 'executive editor in chief' for the highly controversial Chinese tech giant Huawei. From seeing him on Newswatch many times, always sticking up for the BBC, I suspect it won't be long before he's saying that Huawei is getting everything about right. The top comment at The Mail on Sunday reads, 'No honour, no integrity. These are the sort of people that run the BBC.'
III
I suspect many will agree with The Times's Richard Morrison about the BBC's 'sordid' Jimmy Savile drama, starring Steve Coogan:

It was the BBC that fuelled his career and gave him a nationwide, peak-time platform. And despite all the allegations, it was still protecting and projecting his “saintly eccentric” image when he died, less than ten years ago. For such a tainted organisation to be thinking about using the name of Savile once again — after all that has been revealed — to boost its ratings and generate publicity for its TV drama output beggars belief.

I’m surprised that Coogan, a thoughtful man, has accepted this role. I’m astounded that Tim Davie, the BBC’s director-general, has approved the project, especially with all the other battles he needs to fight to safeguard the BBC’s future. He should think again.