The Daily Politics with Andrew Neil. Peter Dowd MP, Shadow Chief Secretary to the Treasury is in the hot seat. A little sheepish, but still loyal to Dear Leader. Andrew Neil had a long list of examples of Labour’s outrageous conduct, (reputedly lifted from Guido Fawkes) which he read out, item by item. Dowd had no answer, but he did express regret.

The Today programme featured Kier Starmer who said the party should “deal robustily” with the antisemitism. 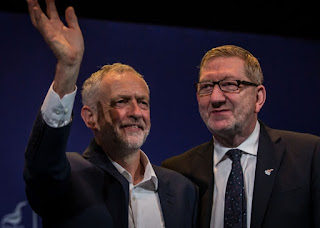 We mustn’t forget Len McCluskey who has written a nasty piece in the New Statesman in which he dismisses it all as a smear.

Did you know that Jennie Formby is a former partner of Len McCluskey a relationship from which they have a son? She’s the one who has the task of dealing with it, no doubt robustily.
Posted by sue at 18:15