Lord Adonis is on the BBC again

The BBC has been prominently covering the anti-Brexit 'People's vote' campaign today. 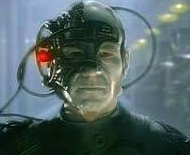 This morning's Andrew Marr Show featured an interview with Locutus of Borg, leader of one anti-Brexit campaign. (The group's slogan is 'Brexit is futile').

And 'Campaigners demand 'people's' Brexit vote' has been the second story on the BBC News website for most of the day.

And this afternoon the BBC News Channel, reporting from the London anti-Brexit rally, interviewed Lord Adonis.

Lord Adonis told the BBC an egregious lie, saying that Theresa May promised £350m for the NHS post-Brexit:

There isn't going to be the £350m that she promised for the NHS every week.

Now, you and I know that Mrs. May never said any such thing and wasn't even on the Leave side of the referendum, but the BBC interviewer (Vicky Young) allowed His Lordship to get away with this absolute whopper.

The obvious response from all sensible people here is to complain directly to Ofcom about the BBC promoting this anti-Brexit campaign on all their channels, giving Lord Adonis yet another platform and, worse, allowing Lord Adonis to lie live on air with no comeback whatsoever - a BBC shambles.

#AntiBrexitBroadcastingCorporation.
Posted by Craig at 18:14