The BBC hasn't exactly done its reputation for reporting much good over its coverage of the Hungarian election.

Firstly, there was the misinterpretation of the meaning of a high turnout: 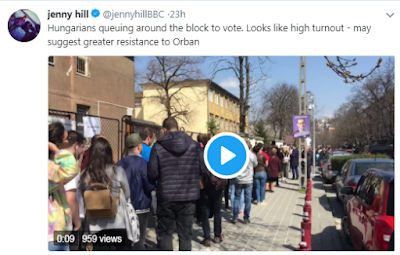 I follow a Twitter feed called Europe Elects, which provided updates on turnout throughout the day, and I noticed them reporting, some four to five hours before that BBC One bulletin, that Fidesz-leaning counties were performing better than opposition regions, turnout-wise so I suspected this was nonsense. Yet still the BBC ploughed on regardless, and, bizarrely, persisted in saying "the high turnout could help the opposition" as late as last night's BBC One News at Ten.

Jenny Hill (rightly) took some flak for that tweet about a high turnout possibly leading to "greater resistance to Orban" but her colleague Nick Thorpe was entirely on the same page as her, telling the BBC News Channel that a high turnout was "important" and that an "upset" was possible.

Well, they were wrong. The historically high turnout led to a significant swing in the popular vote towards Fidesz.

Was it wishful thinking (i.e. bias) on their parts? Or had they taken the predictions of Hungarian political 'experts' on trust? 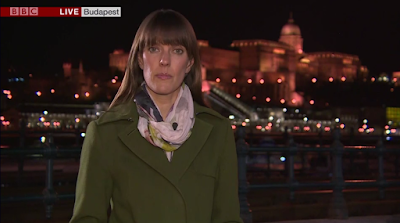 Secondly, having failed to stop digging that hole, Jenny Hill then decided to start digging another one on last night's BBC One News at Ten:

We are just getting preliminary figures which suggest that Viktor Orban has done it, securing himself a third consecutive term in office. But, something has shifted. It looks as, if these figures are borne out, that his Fidesz party has a majority but it has narrowed. Something has really shifted here. It has been an extraordinary day, record turnout and some voters queuing for hours to demand change. It's as if a country is holding its breath. Tonight could, just could, affect profound change for Hungary.

Wrong again. The only shift was towards 'no change', with Fidesz increasing its vote share and the two biggest opposition parties falling back.

After all this I had to grin at how the BBC was introducing this story this morning:

Hungary's Viktor Orban has defied critics at home and abroad again with an impressive win in Sunday's general election.

Never mind the "critics at home and abroad", he also "defied" the BBC!

The third area where the BBC fell down yesterday is frankly bizarre...

"He's been in power since 2003" was the recurring phrase over those 4-5 hours of BBC reporting. And yet it's completely untrue. Viktor Orban hasn't been in power for the last 15 years. He was first PM from 1998-2002 and then again from 2010 onwards.  Why did it take so long for anyone at the BBC News Channel to spot this error?

The incompetence of the BBC's reporting here is quite something, isn't it?
Posted by Craig at 10:39