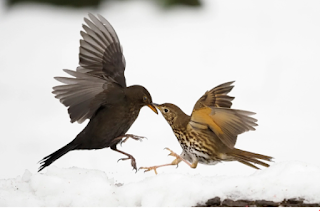 Poor Hugh Sykes got teased on Radio 4's Broadcasting House this morning for misidentifying a singing bird in his garden. He thought it was a blackbird but a hundred or so BH listeners protested that it was a thrush. Apparently he has form too, getting his swallows and swifts mixed up in Syria a few years ago.

Meanwhile his teaser, Paddy O'Connell, was busy telling the audience:

The rapper Kanye West has come out for Donald Trump. West, who praised their shared dragon blood, gained an important friend in the White House but lost 10 million followers on Twitter.

Now, Paddy should have then got his Trump impersonator to say, "Paddy, you're FAKE NEWS!", because that was fake news. As The Independent put it:

Kanye West isn't actually losing followers on Twitter despite his use of it to support Donald Trump.

But despite the controversy around the posts, West's followers do seem to be staying the same, at around 27 million. The number might be changing on some people's screens, but that appears to be a problem with Twitter rather than people taking issue with his posts.

A Twitter spokesperson that the fluctuations were a mistake.

"We can confirm that Kanye's follower count is currently at approximately 27M followers," the company said. "Any fluctuation that people might be seeing is an inconsistency and should be resolved soon."

In fact, Kanye appears to be closing in on 28M followers now.