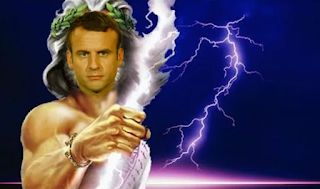 From this morning's paper review on The Andrew Marr Show...

ANDREW MARR: Let's turn to someone who probably won't be turned away by Immigration when he arrives. Donald Trump is coming to visit the country in July.

LYSE DOUCET: Yes he will, and I think a lot of people in Britain are asking about that so-called 'special relationship', when they saw another relationship on show this week. "Bromance" was very much in the world headlines last week, and in The Observer they are showing what they're calling "dandruff diplomacy"...

LYSE DOUCET: ...as President Trump flicks away a speck of dandruff, and he says, "There now. You're perfect". And judging from the images coming out of Washington, all the pomp and circumstance, Emmanuel Macron wanted to shake hands with President Trump more than Melania Trump did! But there is serious intent to all this. Emmanuel Macron has really weaponised in diplomacy the bear hug because, after days of hugging and hand-holding, he went to Congress then and ripped into many of President Trump's signature policies. A great line, he said "There is no planet B". Now for those of you who still hold onto that special relationship - I'm not sure you still do - there is a letter in The Sun that "there is no greater alliance than you and us"..."you and the US" and "we need it even more" - the Ambassador looking ahead to the visit by Donald Trump. It's now been confirmed for July 13th.  And we already know from the property mogul, Donald Trump says "I'm not going to cut the ribbon at that embassy. It's in Nine Elms?! You should never have moved from Grosvenor Square. Location, location, location!".

ANDREW MARR: Nine Elms is a little bit south of the river for the Donald.

ANDREW PIERCE: Did you see. There's a great cartoon in The Sunday Times again on Trump and M. Macron. There's Donald Trump saying to Mr. Macron, clutching their hand very tightly, "Boy, you're hot!" to which Mr Macron says "That'll be global warming", because he was out there of course to talk about ...get him to stick to the Paris climate change.

ANDREW MARR: An interesting balance between really kind of cosying up to the Donald on the one hand and then hammering him on the policies. A very, very acute piece of diplomacy there.

ANDREW MARR: Nice in person, but...

LYSE DOUCET: President Macron is called "the Trump whisperer". I think Theresa May wanted to have that kind of a role. Let's see...She held hands as well if you remember when she went to see President Trump. She was the first world leader to go and visit him.

ANDREW PIERCE: And she's been criticised for it ever since, of course.