A Day in the Life

It's been an interesting 24 hours or so for the BBC's Rajini Vaidyanathan.
Last night she appeared on Radio 4's News at Six saying:

Dr. David Starkey's long been known for stirring up controversy. This isn't the first time he's used racist and offensive language. His latest remarks came during a 50-minute online video with a right-wing commentator Darren Grimes, who describes his website as "a safe-space for racist and homophobic views".

She then got involved in a self-congratulatory, 'high-fiving', group hug with some of her peers on Twitter:

Scott Pack: Very interesting BBC radio news report on Starkey latest racist rant. Instead of their usual stance of saying 'comments that some have viewed as racist' they straight out called them racist and 'laced with bigotry' and had to warn listeners before they played his words. I applaud the BBC's Rajini Vaidyanathan for her honest and straightforward reporting. Great to hear.
Rajini Vaidyanathan: Thank you. Calling out racism for racism should be obvious. It’s basic. Thanks to my editors today who let me call it as it is, without hesitation.
Jess Brammar: Just heard BBC Radio 4 bulletin refer to David Starkey’s comments on the riots in 2011 as racist (not “racially charged” or “controversial” etc) and it’s very refreshing to hear it called what it is.
Rajini Vaidyanathan: That’s what it was. That’s why I said it.

Unfortunately for her, Darren Grimes then announced (today) that he's started legal proceedings against her and the BBC for what she said about him there: 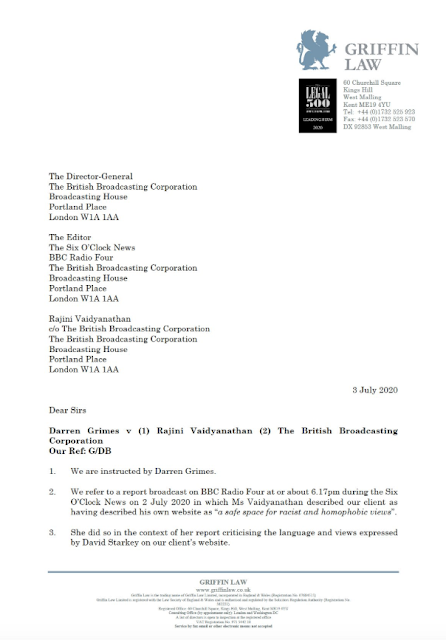 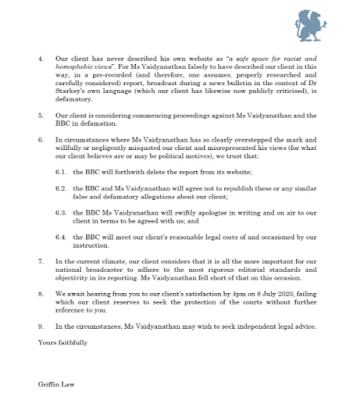 The BBC swiftly issued a 'clarification':

What an extraordinary thing that BBC 'apology' is! Why on earth is it quoting Pink News to clarify what Darren Grimes's website did or didn't say?
Update: Within the last ten minutes I've found that I'm not alone in being puzzled by that bit about Pink News in the BBC response. Douglas Murray has just tweeted:

Source of BBC lie becomes clear. They used Pink News as a source. Had to issue correction. Error built on error. Malice on malice. Reminder of a reliable rule of thumb: the media who pretend to care about ‘fake news’ tend to be biggest purveyors of it.

My other thought here is that the need for 'high fives' on Twitter is driving BBC journalism ever deeper down the drain.
Posted by Craig at 19:54