"BBC seems swept up in an emotional tide" 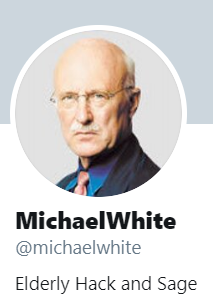 Do you remember 'Michael White of The Guardian'?

He used to be that paper's BBC-friendly political editor, and in the first decade of the present century, in blogs hereabouts at least, he was regarded as the absolute epitome of the snooty, 'wine-drinking', (possibly muesli-munching), left-liberal, Labour-Party-friendly, pro-BBC hack - the ying to Polly Toynbee's identical yang, so to speak.

Anyhow, the great man's thankfully still in action (albeit on Twitter) and this very morning he sent out the following exasperated-sounding tweet:

Lots of anti-racist talk on BBC Radio 4's Today (again) today, much of it muddled, conventional thinking (again). It’s an important issue, but BBC seems swept up in an emotional tide. I switched to R3 where there are no complaints (yet) that music is too dominated by dead white Germans.

Now, if BBC Radio 4 has lost 'Michael White of The Guardian' of all people - one of their friendliest friends, often a presenter on their programmes - then I sense huge trouble ahead for the BBC.

The BBC Radio 4 audience includes a good number of 'Michael White of The Guardian'-type people.

As regular readers will know, that station's increasingly dour, narrow, woke focus has certainly put me off in recent years, but for it to make 'Michael White of The Guardian' despair of it is truly one hell of an achievement!
Posted by Craig at 19:08