Labour pays out six-figure sum and apologises in antisemitism row.
The BBC and the Guardian are reporting this as if butter wouldn’t melt. I can’t fully access the Guardian’s article now unless I register, and I can’t say I want to do that at the present. However, when I saw it earlier today (when I could access it for some reason) their report looked extensive. That’s one thing one can say about the Guardian; unlike the BBC whose write-ups always sound so non-committal, as if they’re walking on eggshells of their own making - the Guardian goes into detail. The general effect of the BBC’s über brevity is that anyone can project their own meaning onto any given story.
Anti-Semitism: Labour pays damages for 'hurt' to whistleblowers 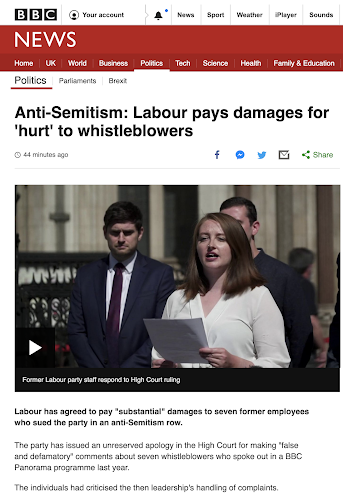 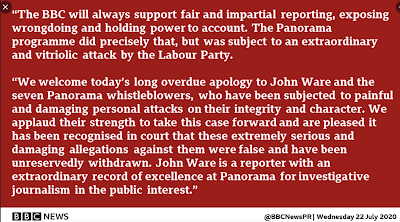 After Jeremy Corbyn's statement, which said Labour settlement was a 'political not legal' decision, journalist John Ware understood to be consulting his legal team

BREAKING: I am told that journalist John Ware is planning to sue Jeremy Corbyn.

According to a few Labour sources this morning, it's "very possible" and "highly likely" that Jeremy Corbyn will have the whip removed very soon, as a result of some of the recommendations in the EHRC report.#LabourAntisemitism