The BBC tells us that Twitter is dropping the term 'master' from its programming code "in favour of more inclusive language" ('master' being the main version of the code), and The Daily Mail tells us that estate agents in London and the south and dropping the term 'master bedroom' for similar reasons.
By coincidence, I was just catching up with a BBC Four programme - a repeat from 2011. The series, about 20th Century British paining, is called British Masters and in it presenter James Fox celebrates the "uniquely British take on modern art" of a group of British painters and calls them collectively "one of the finest artistic movements in all of Western culture".
I do hope it's title doesn't see zealots at the BBC remove it from the iPlayer. (You'd think not, but you never know at the moment.)
Anyhow, one of the masters featured in the programme was William Coldstream, who gave the public what it apparently wanted - realism. Here, for example, is Bolton: 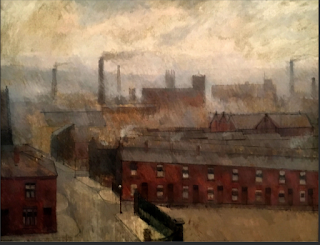