Our minds are being truly boggled by the BBC. 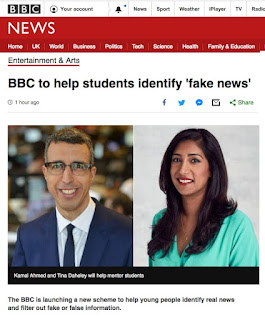 The term "fake news" was popularised by Donald Trump during his presidential election campaign last year.

He used the term to denigrate the output of the traditional news media, although it is also used to describe news stories that achieve significant traction despite being palpably false.

This in itself smacks of fakery pokery, but I do have to ask, will they be highlighting the BBC’s own social engineering project, the Today Programme? For example, for Mishal Husain’s oddly gratuitous, sugar-coated reports about British Muslims or Manuel Hassassian’s questionable statements in his entirely foreseeable meltdown.

Okay, so there are some very British Muslim farmers, who say the requisite words in Arabic whilst practicing an entirely humane version of Halal slaughter. Jolly hockey sticks.
I’m sorry to say that John Humphrys was blatantly hostile to the Mayor of Jerusalem Nir Barkat when he interrogated him this morning, abandoning all pretence of impartiality. (As they do when speaking to Israelis)

Of course Nir Barkat doesn’t understand the true extent of the BBC’s ignorance of the history of Israel nor the hostility with which the BBC approaches all Israeli spokespersons, and he might not be aware of the BBC’s gullibility with regard to the fakery pokery within Palestinian narrative.

John Humphrys reinforces his outrage by listing a cornucopia of hostile Arab States that have reacted badly to the American Embassy's intended relocation, and to Jerusalem being 'recognised as Israel's capital'.
Those familiar with the non-revisionist history of Israel would accept Nir Barkat’s comments vis a vis Jerusalem as a given, but due to years of the BBC’s bias by omission, John Humphrys, and I’m sorry to say the majority of listeners, well versed in anti-Israel propaganda, will have found them arrogant and offensive.
As for the threats of violence, which amount to tantrums from the Palestinians when confronted with reality, well, John Humphrys wasn’t afraid to bring the subject up,

The consequences will be massive, won’t they?

I don’t think so.

You don’t think so?

and he immediately starts using the impatient, staccato delivery he reserves specially for expressing fury and exasperation.


But what they want is a two-state peace process don’t they, and.. This. Will. Destroy that process. Completely

Two-state peace process? Whatever. Move on and let us fast forward to ten past eight when a particularly adenoidal-sounding Jon Sopel joins the programme  to traduce Trump. Sopel is in even more Private Pike mode than usual. I do hope he’s remembered to put on his vest.

Humph and Sopel share the hope that Trump will back away from this. Boris is ‘concerned’.
Manuel Hassassian 'effectively the Palestinian ambassador' thinks ‘it’s going to be repercussions that will be very detrimental,’ and ‘violence will be inevitable’. Now John Humphrys’s indignation is directed at Trump, in sympathy with his interviewee.

“He’s declaring war in the Middle East, he’s declaring war against one point five billion Muslims and hundreds of millions of Christians that are not going to accept their holy shrines to be totally under the hegemony of the Israelis”

John Humphrys seems to have calmed down.
“The Palestinians don’t have the wherewithal to declare war on the U.S.” says Humph. ”How will they prosecute their war?"
“The Palestinians will go down to the streets,” declaims Hassassian, “Let’s not forget what happened in the summer when the Israelis tried to close down the Al Aqsa Mosque… to the prayers… and you know almost an intifada could happen.”

Can you spot the fake news?

Sorry, but what with Mishal Husain’s saccharine ‘reports’ about British Muslims (why?) and a predicted avalanche of hostility towards Israel, I really do despair.

The only consolation and it’s not much of a comfort, is that some of the Tweets and comments I’m seeing are not wholly on message.