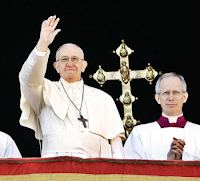 The compulsion to fact-check the BBC is growing in me. There really was no reason, other than not trusting the BBC to be accurate, for me to rush to Google to check the following (from one of their main News website reports) - after all, how likely was it that the BBC could get the Pope's family background wrong?:

So, as you can see, the BBC was partly right. It turns out that it's a bit more complicated than simply the Pope being "himself the grandson of Italian migrants". On his paternal line, he himself was the son of an Italian migrant, and on his mother's line only one of his grandparents was an Italian migrant.

As I wasted a few interesting minutes researching all of that I thought I'd share it with you (as it's Christmas)!