One of the BBC's hallowed Christmas Eve traditions is their now yearly piece from Bethlehem about how hard-done-by those poor Palestinian shepherds abiding in the fields (or in concrete buildings) are thanks to those horrible Herod-like Israelis.

This year, however, there was an added twist: Caesar Donaldus was also to blame. 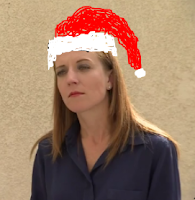 She was on Radio 4's Sunday on Christmas Eve, and here's how Edward Stourton introduced her piece:

Later this morning the head of the Latin Catholic Church in Jerusalem will, in accordance with tradition set off on a journey to Bethlehem where he'll celebrate Midnight Mass tonight. But these days the route means he'll have to go through Israel's West Bank separation barrier - a reminder that even at Christmas the politics of the place aren't far away.

The problem this year, according to Yolande, wasn't just Israel and its separation barrier and its "military watchtower built into the high wall at the edge of Bethlehem". No, it was Donald Trump's decision to recognise Jerusalem as Israel's capital that is scaring off the tourists, leaving the streets of Bethlehem mostly empty. People there aren't happy bunnies.

And Yolande wasn't the only one at it. Martin Bashir was all across the BBC on Christmas Day, reporting from Bethlehem. Here's just one example (from BBC Breakfast):


And, at the very beginning of the Christmas narrative, here in Bethlehem, in a land defined by walls of separation, a renewed call for reconciliation. Here in Manger Square, a midnight service has been held that the Church of them as nativity, where the Archbishop of Jerusalem said that, while Jesus was born in a town under Roman occupation, he was identified as the Prince of peace.

For him too though, it was mainly about Big Bad Donald Trump.

For much more on this please read a couple of posts from BBC Watch:

Didn't the Palestinians with their reputation for violently rioting, especially after their leaders calls for (days of quiet prayer) 'days of rage', also have something to do with the fall-off in tourists? Didn't Palestinian leaders calling for - and enacting - the cancellation of non-religious festivities in Bethlehem also have something to do with it?

If it did, the BBC wasn't saying. Easier to blame Trump and the Israelis.
Posted by Craig at 17:34