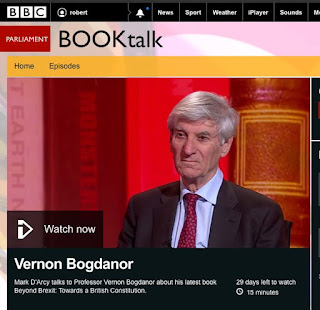 Book Talk
To counteract some of the hysteria surrounding Boris's prorogation I thought I’d post this. I watched it yesterday on the Parliament channel and was about to post it on the blog when I realised it took place about six months ago. But now I’ve spotted this, (via Guido Fawkes) so we’re back on.
Mr Bogdanor’s calmness and clarity might be just the emollient the doctor ordered.

Oh yes and I remember not so long ago when the BBC was bandying around the term “audacious” in an awestruck kind of way, mainly when describing acts of terror. Will the Beeb use the term to describe Boris’s ‘undemocratic’ tactic in a similarly awestruck manner?