I know, I know. Some topics (and people) are a real turn-off. For example, I saw Barry Gardiner on the Sophy Ridge programme for a nano-second and had to turn the TV off.

Actually, I was grateful for the impetus, as I usually waste too much time on a Sunday morning watching politics when I should be out in the open air (as my mother used to say) enjoying nature and stuff.

My reaction to Barry Gardener is a lot nearer to an actual phobia than most of the other so-called phobias bandied about these days. So, doctor, I’m pretty sure I have Barry Gardinerophobia, and please don’t suggest the therapy that acclimatises you to your irrational fear because I. Ain’t. Doing it.

The thing about turn-offs, though, is that there is a difference between heartfelt, near physical revulsion and the plain and simple “Oh, no, not another one’, Brenda-from-Bristol type aversion, a mixture of boredom, tedium and ennui. So I hope it’s the latter that is about to affect you now as I’m about to revert to type and re-mount my one-trick pony. Look away now if you’re experiencing Brenda-like feelings of exasperation.

Yep, we all know the BBC is institutionally pro EU and it’s having a hard time trying to look impartial in accord with its charter and its editorial standards.  I think that battle has been lost.

However, the other institutional ‘pro’ that the BBC is having better luck in hiding or concealing is the pro-Palestinian prism through which all its Middle East reporting is filtered, with the possible exception of some of its more obscure science-related items. But they’re rare. The BBC has been able to get away with it by relying on the audience’s lack of historical literacy; in fact, it helpfully supplies us with some historical inaccuracies itself, because it can.

Why though? What is it about the BBC that compels it, as an institution, to embrace the profoundly unChristian basics within Islam while rejecting Christian principles themselves? Love thy neighbour? Do as you would be done by?

BBC Watch and Jewish News both address the reporting of the recent death of the 17-year-old Israeli girl Rina Shnerb who was killed by a bomb. Her brother Dvir and father Eitan were seriously injured as well.

The BBC reported it in such a way that the reader would be reminded that there was some ‘justification’ for this bomb. Simple as that. 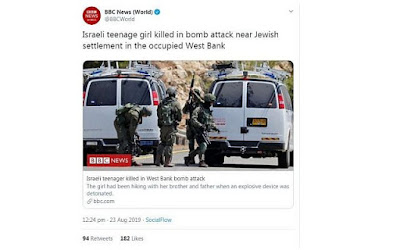 "Israeli teenage girl killed in bomb attack near Jewish settlement in the occupied West bank” Yet when Jewish News reported:

“The Board of Deputies has demanded an apology over a BBC World tweet about the death of an Israeli teenager killed in a bomb blast.”

A spokesperson for the BBC said

“this is a factual tweet which includes the location of the girl’s killing”.

A few “innocent face” comments below the line illustrate the difficulty of divining bias without a rod.
“Where is the tweet factually incorrect? asks someone.
'The occupied West Bank' explains where it is.” says another.

Hmm, but there are other ways of describing the location of this incident. For example:

“Dolev, which is about 15km (9 miles) north of Jerusalem and near the Palestinian village of Deir Ibzi”

(From within the body of the BBC’s own report.)

Describing the location as “near Jewish settlement in the occupied West bank” might well serve to quickly identify it in the mind of an average reader unfamiliar with the geography, but it also sends a signal which all but diffuses the outrage with which most people would react to the willful killing of any 17-year-old girl. It emotes: The ‘militant’ Palestinians who placed this bomb were ‘driven to it’.

”the leader of the militant Palestinian Islamist movement Hamas praised the attack but did not say that it was behind it.

without specifically mentioning that:

Haniyeh called the murder of a seventeen-year-old girl “a heroic attack”.

or that Hamas in a statement said the bomb attack was “proof of the vitality and bravery of the Palestinian people, and of the fact that it will not surrender to the crimes and terrorism of the occupation. 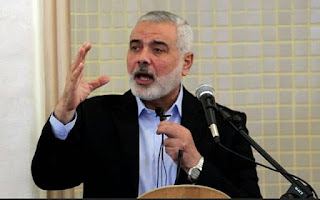 I can see that identifying a location in a politicised manner might be defended with the claim that  this bomb, too, could be interpreted as a ‘political act’, but once you go down that path you’re halfway to confusing terrorism (the unlawful use of violence and intimidation, especially against civilians, in the pursuit of political aims) with political militancy (the use of confrontational or violent methods in support of a political or social cause)  Oh wait, you’re already there.

With rare exceptions, the BBC will only use the term ‘terrorism’ in reported speech if and when it occurs, but something they will include each and every time they have to report another act of ‘militancy’ is their ever-present ‘mantra’ on ‘settlements’ and ‘International law'. See BBC Watch for more on that.

However, when the BBC begrudgingly states, as it’s obliged to do, that “Israel disputes this” it rarely (never) sets out the legal argument behind Israel’s ‘dispute’. Hiding the complex legalities behind a trite, subjective mantra deliberately shelters ‘the case for Israel’  from objective scrutiny, which reveals the BBC’s not so hidden agenda.

If you have been, thanks for listening.

You might assume that the BBC sources its news from the Palestinian Authority. See PMW (Palestinian Media Watch )


"The occupation forces closed the main roads to the villages west of Ramallah and increased their military presence at the entrances to the Ramallah and El-Bireh district. This took place on the pretext of the killing of a female Israeli soldier and the wounding of others near the settlement named Dolev, which is located on the [Arab] residents' lands of west of Ramallah.”


"Needless to say, 17-year-old Rina was not a soldier and no Israeli authority ever claimed she was a soldier.


"The explosion near Ramallah that killed an Israeli settler and injured two others as well as revenge acts by the settlers against the civilian Palestinian population in the occupied territory were highlighted on the front page of the three Palestinian Arabic dailies today.”