I heard Yolande Knell’s report this morning. It sounded all wrong. Perhaps BBCWatch will give us a more sympathetic account of Israel’s position on all this in due course, but although I’ve spent far too long looking at the story online from as many angles as I can bear to unearth, all I can say is that none of the parties involved come out of it particularly well. 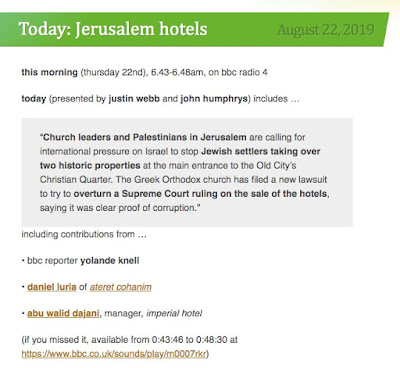 The left-wing press and of course, the BBC have had a field day. Of all the reports I’ve read, most seem to take the view that an injustice has been done to the current tenant of the New Imperial Hotel Jerusalem,  75-year-old Abu Walid Dajani who has been running the hotel for 800 years. (not personally, I assume)

The villain of the piece, according to Knell and the left-wing press, is ‘right-wing Jewish group Ateret Cohanim, which has a nefarious aim. What could that be?  To “stop a Jewish take-over” or to “Judaize” East Jerusalem “which the Palestinians want as the capital of their future state”.

The factor that makes this 14-year-old story newsworthy at this time is the Israeli court’s recent decision to uphold the validity of the sale.

The actual legal dispute concerns the alleged corruption surrounding the sale (14 years ago) of various properties including this hotel. The former owner of the properties was the Greek Orthodox Church, who didn’t come out of it smelling of roses either.
The dodgy individual involved in the transaction was former Church finance director Nikolas Papadimos who has since done a runner.

Predictably, Yolande Knell was openly sympathetic to Mr Dajani and she took an adversarial tone with Daniel Luria, the representative of Ateret Cohanim; again, much as expected.
What I didn’t get was the apparently gratuitous soundbite  (audio of a woman screaming because she was being evicted by ‘settlers”) “earlier this year.”  I think I heard a gunshot in there too. Was this directly relevant to this case? Who knows. Or was it emotive ‘sound effects’, put in the report just because.

The vox-pop type quotes we heard from Mr Luria sounded disjointed, and I couldn’t help wondering if his comments about “Jewish Land” and so on had been truly representative of the whole of his testimony. Was I only hearing what I wanted to hear?

One detail we didn’t get from Knell was that Abu Walid Dajani hadn’t paid any rent for 14 years, but I suppose he probably had his reasons.

Update:
BBC Watch has come up with the goods

"Not only did this report repeatedly promote inaccurate information concerning the properties which are ostensibly its subject matter but Yolande Knell has clearly exclusively embraced the Greek Orthodox Church’s narrative.

More gravely, Knell unquestioningly promoted the partisan political narrative she long since adopted with her framing of Old City houses inhabited by Jewish Israelis as ‘illegal settlements’, the inhabitants as ‘settlers’ and her uncritical amplification of the claim that the location is “Palestinian”.