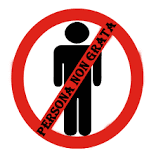 Trump’s "Muslim ban." That's how Ilhan Omar and Rashida Tlaib describe Israel’s last-minute decision to ban them from their proposed tour of Palestine, the non-existent state that non-exists in Israel.
Of course, they can’t actually go to Israel while boycotting it. That would be hypocritical!

You might have noticed there’s a particular type of spin attached to the reporting of a decision that turns out to be the gift that strikes two of the media’s least favourite birds - Trump and Israel - with one stone.

There are numerous examples of this spin, but let’s stick to the BBC. (1m 24s)
Newshour and The World Tonight featured two ‘anti” interviewees. The poisonous hag (sorry) Hanan Ashrawi who giggled with forced amusement at any question she deemed preposterous while making the ultimate preposterous statement herself, namely  “Israel cannot tolerate dissent!”.

Next to reinforce the BBC’s disapproval was Yaakov Katz of the Jerusalem Post, whose argument against the ban came through as deluded naivety. He hoped the two democratically elected congresswomen ‘might see how open Israel is”.   A likely scenario (I don’t think.)

However, a lengthier presentation of this development came with Beyond 100 Days. Katty Kay and David Eades (sitting in for Christian Fraser) with the help of Tom Bateman and Chris Buckler.

All were in default anti-Trump mode. While Katty Kay was probably quite correct to speculate that President Trump was using this opportunity to divide the Democratic Party (a shrewd move perhaps) by ‘tarring the whole party with the “views they (Omar and Tlaib)  might have,” the actual views “they might have” were played down. Hardly mentioned (not mentioned) was the fact that the pair’s proposed itinerary left hardly any space (no space at all ) for any of the so-called ‘reaching out” that rose-coloured specs-wearing pro-Israel opponents of the ban hoped for.

Rather than detailing the anti-Israel /antisemitic histories of these two ladies, they glossed them over  with the pared-down, cavalier “having been critical of Israel.’ Someone mentioned: “coming with open eyes, open ears and open minds.” (As if!) Buckler even revived the truncated  “Go back to their own countries” theme, which I mistakenly assumed had been discredited for good.

Ilhan Omar has announced. “This is Trump’s Muslim ban being implemented.”

If you think this move by Israel is a bit of an own goal - and in many ways, that’s what it looks like, try thinking again.

Take, for example, the ‘bans’ our own country has implemented over the years. Take the bans that many of us consider having been unwarranted, for example when the Home Office banned Geert Wilders, Robert Spencer, Pamela Geller, Lauren Southern, bans we opposed in the name of freedom of speech. These voices should be heard, we said.

But how many of the people we wanted to hear were seriously coming with “open eyes, open ears and open minds.” Is it likely that Geert Wilders would have gone to one of Luton’s or Birmingham’s many Mosques to ‘learn’ about the beauty of Sharia from one of the imams? Perhaps he would then go back to Holland and say “Hey guys, I was a bit harsh on Islam. Forget the whole Fitna thing and bring it on”.

On the opposite side of the coin, look at the case of ‘Jews bake bread out of babies’ blood’ Raed Salah. He managed to evade the ban although I’m not sure if he was able to take up the invitation to take tea on the terrace with Jeremy Corbyn, but I’m pretty sure that nothing he did or saw in the UK helped moderate his antisemitic views or did much towards promoting peace and goodwill.

So I would speculate that Ilhan Omar and Rashida Tlaib had no more intention of ‘learning’ anything at all from their Ashrawi-sponsored tour of Palestine.

I have to say that certain individuals who claim they are only defending their right to exercise free speech are in fact hellbent on crying ‘Fire’ in a crowded theatre. So on this occasion, Israel’s US-inspired decision is probably the right thing to do. 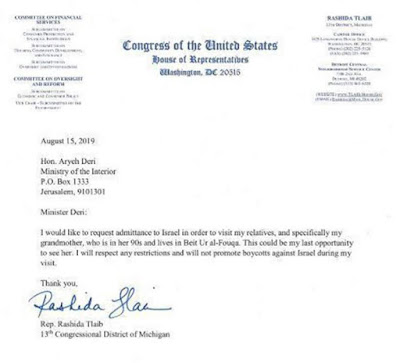 Meanwhile, Rashida Tlaib has been granted the right to enter the Israeli-occupied West Bank on humanitarian grounds. She has a 90-year-old grandmother there. The proviso is that she would “not promote boycotts” during her visit.

Oh noes! Under such oppressive conditions, she doesn't want to go after all!

Silencing me & treating me like a criminal is not what she wants for me. It would kill a piece of me. I have decided that visiting my grandmother under these oppressive conditions stands against everything I believe in--fighting against racism, oppression & injustice. https://t.co/z5t5j3qk4H
— Rashida Tlaib (@RashidaTlaib) August 16, 2019