So bad it's (almost) good

“The UK government is completely controlled by Israel”

“The UK is completely controlled and occupied by Israel and is supporting Israel to kill innocent people who are demonstrating for their rights.”

What is it about those people who unintentionally reveal their own thoughts and wishes through this uniquely infantile type of projection? This example is such a blatant ‘reversal of the actualité’ that it’s quite comical. It’s so bad it’s (almost) good. I wonder if the oleaginous Afshin Rattansi from R T agrees with Ahed. I don’t suppose we’ll ever know.

The BBC is undeterred by the negativity surrounding this foolish little liar. (Foolish to tell such obvious lies, but smart enough to manipulate others.)  No wonder Ahed Tamimi is dazed and confused. She has been indoctrinated from birth by professional agitators, the Tamimi clan, but she’s wise enough to tailor her message to suit the audience.

The BBC is promoting Ahed and two other ‘minors’ in a nasty little propaganda film. The producer, Megha Mohan, the BBC's "gender and identity correspondent", has an openly anti-Israel agenda, and with this, the BBC is openly encouraging inflammatory propaganda and violating its remit. It’s quite appalling that it was ever approved.

Tamimi didn’t seem to have had much to complain about in prison, but Krishnan Guru-Murthy manages to prise something detrimental to Israel out of her in this interview. She’s wearing her silver pendant in the shape of ‘One State’

Guru-Murthy believes Israel has treated her too harshly for the crime of ‘just a slap’. Who knows whether or not he’s aware of her and her family’s record. Not that she’s responsible for her terrorist Auntie  Ahlam who’s being protected by Jordan,  but she certainly sees her as a role model. 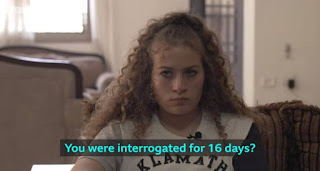 “While the BBC shows footage of Tamimi attacking an IDF soldier, for which she spent eight months in an Israeli prison, it fails to give any real background on the Palestinian poster girl for terror. For the real tragedy is not Tamimi’s experience with the Israeli military court system (what the BBC terms a “childhood”).

Ahed Tamimi’s entire childhood has been spent in an environment permeated with Palestinian terrorism: terror  in which her family has long played an active and prominent role.  For example,  Ahed’s aunt helped plan the horrific Sbarros Pizza restaurant bombing, and her mother posted anatomically precise tutorials on how to most effectively stab Israelis.

Ironically, this very terrorism is the reason Israel has security measures in the first place.
Since childhood Ahed has learned from her family that all of Israel is occupied Palestinian land, including Tel Aviv, and that she must fight to gain all of it. Hardly a path to peace. And Ahed’s family have placed her personally in danger over and over, for the benefit of cameras.

Her appearance for the BBC is just the latest in a global propaganda tour, milking her iconic status.

“The rights of children are undoubtedly extremely important. If the BBC were so concerned for the rights of Palestinian children, it would be focusing on the incitement that drives Palestinian minors to confront Israeli soldiers, carry out terror attacks or promote violent extremism.


Instead the BBC in typical fashion attempts to portray Israel as a militaristic child abuser backed up by the claims of an iconic professional propagandist, a terrorist-affiliated NGO and its own efforts to muddy the legal waters of international law.

UPDATE
Former IDF military prosecutor Maurice Hirsch, who featured in the BBC film has responded directly on Twitter to the BBC’s Megha Mohan, the journalist responsible. The thread of multiple tweets is a devastating take down from an expert whose insights were clearly edited out of the film in order to favor the Palestinian narrative.

Yes, if you can bear to look at the Twitter timeline of the producer of this programme you can see the agenda. There is no attempt whatsoever to conceal it. No pretence of impartiality or genuine fact-finding. She willfully misunderstands why Palestinian ‘children’ go through military rather than civilian courts.
“Israel says that this is due to an article in the Geneva Convention saying that they are an occupying force” she tweets. I understand that putting Palestinian citizens through Israel's civil courts would necessitate annexation of the West Bank. So that's why. (She probably knows that.)

Another of the children featured claims that she was made to sign a confession in Hebrew. But this is untrue. Maurice Hirsch responds:

But this is something Col Maurice Hirsch refutes. As the Israeli military's chief prosecutor in the West Bank prepared indictments against thousands of Palestinians - including hundreds of children. pic.twitter.com/b7TIPLp3Nu
— Megha Mohan (@meghamohan) August 28, 201 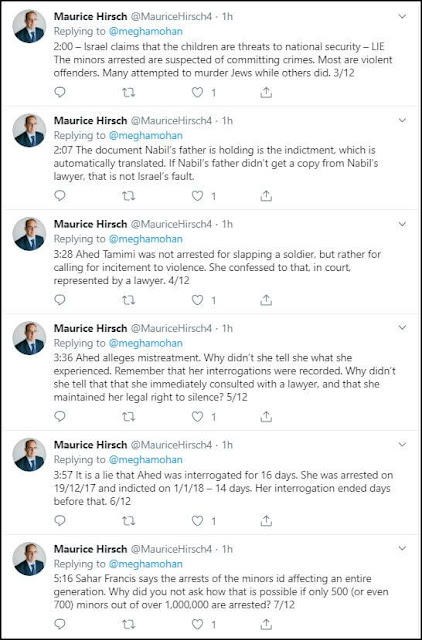 Sadly, you piece is just another example of biased BBC coverage. While we spoke extensively about teenage Palestinian murderers like the murderers of Daphna Meir, the Fogel Family, Ari Fuld and others, you shamefully omitted any reference to them. 1/12
— Maurice Hirsch (@MauriceHirsch4) August 29, 2019

What is a 'gender and identity correspondent' for? How does this role relate to pro-Palestinian and anti-Israel activism? Does the BBC intend to redress the balance at any point?

Update:
BBCWatch has more on this.  Do read. The fact that this film is proving so popular is very disturbing.