Ever wonder what tearful ex-BBC employee Chris Gunness is up to now that he's left the corrupt, discredited and completely superfluous UNRWA? 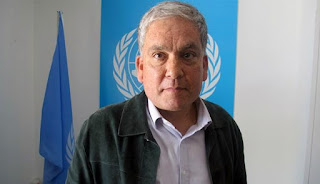 Well, despite his single-minded anti-Israel activism, it seems he's still in the BBC's good books.


One month on, the BBC – which last year put a considerable amount of effort into amplifying UNRWA talking points concerning its funding – has still not provided its funding public with any coverage of this story.

I might as well add this to the list - and btw, I didn’t mention the fact that the BBC has studiously ignored the entire UNRWA scandal. I don’t know why I didn’t mention this particular grievous omission of the Beeb’s, but I think it was because I assumed everyone who reads my posts would already be aware of it. Stupid. A grievous omission of my own. (to preempt the obv)
Posted by sue at 14:38