A glimpse behind the scenes

Mahyar Tousi's latest YouTube video highlights a revealing piece of correspondence from 2013. It was sent by the BBC's Kevin Fitzpatrick - at the time a reporter for BBC Radio Manchester - to the the then-Labour leader of Oldham Council Jim McMahon [now MP for Oldham West], copying in other councillors, Greater Manchester Police and Kevin's BBC boss. 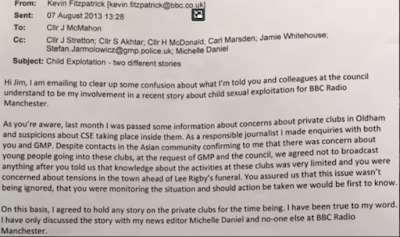 Though it shows that the BBC had - quite rightly - been asking questions about child sexual exploitation involving Oldham's 'Asian community', it proves that Oldham Council and the GMP asked the BBC not to broadcast anything about it and that the BBC agreed - 'for the time being'.

The council and the police were worried about 'tensions in the town ahead of Lee Rigby's funeral'.
We've long assumed that these sorts of conversations went on and that things were not being reported because of concerns about 'social cohesion', but it's still startling to see the evidence in black and white.
Wonder what happened next, after the funeral?
Posted by Craig at 05:08