Can we talk about Telford now or must we wait till the Conservative leadership race is over?

I don’t think (at the time of writing) any of the Conservative leadership candidates have set out their policy on culturally sensitive issues surrounding the grooming gang phenomenon?

At least - or at last - the BBC has acknowledged the “Telford” report. Telford child sex abuse went on for generations, inquiry finds

Up until now, vociferously politically correct ‘anti-racists’ have, with mind-boggling hypocrisy, stifled and suppressed campaigners against the grooming gang phenomenon. People have long been dismissed as Islamophobes for trying to raise awareness of C.S.E. (child sexual exploitation) by “predominantly Pakistani Muslim men.” 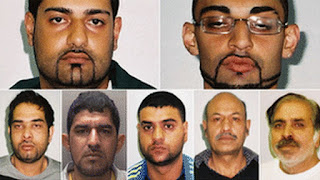 A new Home Office report admits grooming gangs are not a ‘Muslim problem’.

"If we really want to tackle this issue, we have to stop fixating on the lurid and false distraction of “Muslim grooming gangs”.[…]

The past decade has shown that too many people in power are insufficiently concerned when sexual abusers are not from Asian or Muslim backgrounds. Their hypocrisy fails victims and damages prevention efforts."

Okay then. If you say so. It’s imaginary; and racist. 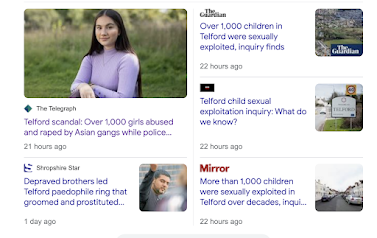 Robinson appeared to be his own worst enemy. Accused of "bringing hatred and division to the town.” he played into the hands of his detractors. Various bad choices led to him being pilloried, imprisoned, and bankrupted  On the other hand, Stacey Dooley shot to fame, fortune, and BBC stardom.

1,000 girls abused and raped by Asian gangs while police looked the other way.

Tommy Robinson brought Telford to the public’s attention way before the press and the media were forced to acknowledge the problem let alone admit the scale of it. Might Robinson deserve a glimmer of recognition from the likes of Mark Steyn? Had the media done ‘the right thing’ in the first place might things have turned out differently?