Let's go back to the old days.

This is a blog about the BBC, but as you probably know, I  do tend to wander off-topic. However, here’s something that definitely does concern the BBC.  It’s an op-ed by Peter Baum, published in Israel National News Arutz Sheva.

The BBC – Way past its sell by date

This headline, if not the article itself - is a tad sensationalist, but never mind. It’s worth a read, but it’s also worth mentioning that on other occasions the author has come in for criticism from the Board of Deputies for making ‘unacceptable remarks’

While the Board (and its president Marie van Der Zyl) is inclined to be excessively cautious - some might say verging on obsequious and/or appeasing - one can almost understand the desire not to rock the boat at a time when antisemitism is on the rise and the dwindling number of British Jews in the UK feel uneasy.

It took Jeremy Corbyn’s leadership and those egregiously antisemitic shenanigans in the Labour Party to (finally) draw outright criticism from the Board, but arguably, that made their intervention a lot more significant than if they’d squandered their credibility by firing off accusations willy-nilly.

Now another bombshell has dropped, and I don’t really know what to make of it. Actually, it popped into our sidebar in the form of a new piece in the Guardian! 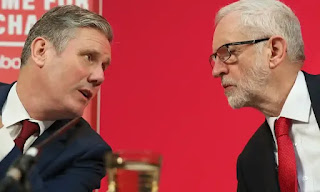 But if you read the actual article, the Guardian seems to give equal credence to the two opposing “factions”.  Correct me if I’m wrong because I haven’t got the stamina to digest it properly at the moment (Too hot) but my personal ‘first glance’ summary boils it down to:

"Faction A accuses faction B of antisemitism, while Faction B’s counter-accusation is that  - I don’t know - faction A is being mean and spiteful."

Possibly a little more nuanced than that, but this remark makes the whole thing look ridiculous:

“In simple terms, each faction believed the other had ‘started it’ ….”

Come on kiddies! Get a grip!

In a similar vein, I ploughed through most of the Oldham Council meeting in which members of the council (plus Andy Burnham) were made to listen and to express regret and contrition over the way everyone mishandled the grooming gang scandal.

I have to admit that shocking as this was to watch, there was a comical element to it. In fact there’s a massive politically incorrect comical element to all of this. The characters are outrageously lampoonable, as are all politicians, councillors, perpetrators  and even victims.

I wish we could go back to the olden days when we could get away with a really vicious “Spitting Image” ridiculing the whole lot of it. Could do with a laugh.