Bias at the BBC 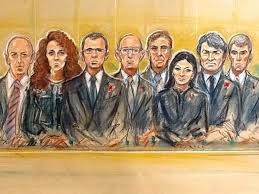 Looking for bias here you could argue that this programme was (a) biased towards the 'broadsheet' end of the press and against the 'tabloid' end (4:1).

Or you could argue that the programme was biased (b) towards the left (Guardian/Independent) wing of the press as opposed to the right (News of the World) wing of the press (4:1), with guests from the Times, Telegraph and Spectator conspicuous by their absence.

Could you claim it was (c) party-politically biased though? Well, politically-speaking, one Conservative and one Labour guest must clearly be called 'balanced' - though the Conservative actually scored points against his own side, and it was left to Neil Wallis instead to do the Labour-bashing to balance Harriet Harman's Tory-bashing. Still, we can safely rule that charge out.

Not so easy to rule out though is the charge that the programme was (d) biased on the thorny question of press regular/Leveson. Four of the six guests were firmly pro-Leveson and pro-regulation (Harriet Harman, Norman Fowler, Nick Davies and Joan Smith) while only two were critical/opposed (Neil Wallis, Peter Preston) (ie. 2:1).

My conclusions from this are that The Media Show wasn't as balanced as it should have been. An anti-press regulation politician and another anti-Leveson right-wing journalist (the Spectator's Fraser Nelson for example) should surely have been added to the panel - though quite how you would have fitted them all into the half hour provided is a moot point.

Predictably they devoted the entire programme to it, which was probably overkill (though the BBC's coverage of the story as a whole has never lacked for 'overkill') and, yes, may well suggest bias and, yes, Steve Hewlett of the Guardian/BBC Radio 4 Media Show acted as both interviewee and reporter (twice), but, still, Laura Kuenssberg did her duty and gave both of her politicians  - Harriet Harman MP, Labour & John Whittingdale MP, Conservative - tough questions critical of their respective parties.

And, yes, though separate interviews with Nick Davies of the Guardian and hacking victim Ulrika Jonsson, also tilted things one way (the expected way), the closing debate could not have been better balanced with Rich Peppiatt, filmmaker and former tabloid journalist, and Baroness Onora O'Neill, philosopher, on one side [the pro-Leveson, pro-regulation side] and journalist and LBC presenter Nick Ferrari, journalist and Isabel Hardman of the Spectator on the other [anti-Leveson, anti-regulation].

That closing Newsnight discussion is what The Media Show should have been like.
Posted by Craig at 20:27