The Pope, "walls", and the BBC's David Willey 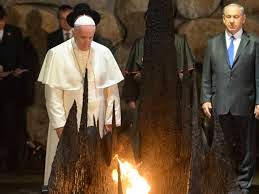 BBC Watch's latest post on the BBC's reporting of the Pope's visit to the Middle East takes the BBC's veteran Rome correspondent David Willey [their "Vatican expert"] to task.

Hadar is spot-on in describing his article (Pope Francis cements reputation for deft diplomacy) as reading in parts "more like a PR communique than a report by an impartial BBC journalist".

There's been quite a whiff of that about much of David Willey's reporting about Pope Francis since his election as pope - in contrast to his evident dislike for Pope Benedict XVI. [There's a faint reminder of that here in, "Pope Francis has shown greater diplomatic skill than his predecessor, Pope Benedict, during his Holy Land visit in 2009."]

BBC Watch makes several criticisms of David Willey here, the first batch of which focus on the article's "context-free" description of Israel's security barrier [which has saved countless people from terrorist attacks over the years] as a "wall" (though Mr Willey does refer to it more accurately as a "barrier" soon after):

On successive days he paused to pray in front of two of the most significant walls here, bowing to touch them with his forehead and his hand.

First in Bethlehem, an 8m-high, graffiti-covered concrete section of the barrier that separates the Palestinian territories of the West Bank from Israel; then, in Jerusalem, the Western Wall, the holiest place where Jews can pray.”

What of that eye-popping comparison between the two "walls"?

Hadar calls it "bizarre" and says that some might call it "tasteless" too - rather as if someone were to compare the Kaaba (the cube at the centre of Mecca towards which the whole Muslim World faces when it prays), with one of Star Trek's Borg cubes.

This whole area is deeply fraught though. The BBC are never going to call the barrier "the anti-terrorist fence" - the term BBC Watch uses. They don't like using the word "terrorist" for starters.

The BBC's own guidelines state:

BBC journalists should try to avoid using terminology favoured by one side or another in any dispute.

The BBC uses the terms “barrier”, “separation barrier” or “West Bank barrier” as acceptable generic descriptions to avoid the political connotations of “security fence” (preferred by the Israeli government) or “apartheid wall” (preferred by the Palestinians).

Of course, a reporter standing in front of a concrete section of the barrier might choose to say “this wall” or use a more exact description in the light of what he or she is looking at.

Hadar also takes the BBC's "Vatican expert" up on his use of the word "sacrifice" in the following passage:

At the Yad Vashem Holocaust memorial, Pope Francis paid eloquent tribute to the sacrifice made by six million Jews who died at the hands of the Nazis all over Europe.


...by definition, a “sacrifice made” involves some sort of active personal choice which the millions murdered by the Nazis did not have the opportunity to exercise...

It was certainly an unfortunate choice of words, though I don't think that any malice was meant by it-  and I suspect David Willey would be mortified to think anyone thinks there was.

Similarly, I think the the post's main charge is also unfair to Mr Willey.


...the fact is that – contrary to the inaccurate impression Willey gives to BBC audiences – the Pope did not mention the figure six million or the word ‘Jews’ throughout his entire speech at Yad Vashem, the full text of which can be read here.

Yes, Pope Francis didn't use the actual words 'six million' or 'Jews' during his speech at Yad Vashem but David Willey surely isn't wrong to say that it was the Pope's eloquent tribute to them? [Sometimes BBC critics, like us, can't seem the figurative wood for the literal trees].

BBC Watch is like that. It's an earnest, thoughtful site which acts as a invaluable corrective to the BBC's skewed reporting of Israel, but sometimes [just like other BBC bias-related sites, including ours] it can paint the BBC in too harsh a light.

[Unlike some of mine] every article is worth reading closely though.
Posted by Craig at 15:08