For the last few days I’ve been (mostly) thinking about Danny Cohen. 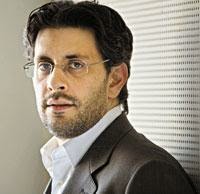 The BBC’s director of television senses an ominous whiff of antisemitism in the air.  The press has shown quite a bit of interest in Cohen’s interview with Yonit Levi of Israel’s Channel 2, and a complaint by a prominent Jewish media figure about rising antisemitism in the UK begs a fair few questions.

I can’t decide how to approach this topic for “Is the BBC Biased?”

“As any fule kno, the Jews control the media, therefore a complaint by a prominent Jewish media figure about rising antisemitism in the UK begs the question: if you’re so goddam all-powerful, why don’t you do something about it instead of whingeing about it in YOUR media?”

Perhaps not. Obviously I’m taking it as read that the BBC is largely responsible for the UK’s rising antisemitism. (What with the supposedly impartial BBC’s biased reporting on nearly all Israel related matters, and a ‘bend-over-backwards’ appeasement of culturally antisemitic traditions, not to mention the weirdly blinkered attitude to immigration.)

“Is Danny Cohen even aware of the BBC’s routinely anti-Israel stance? Who knows? Maybe he isn’t any more interested in the minutiae of the legal and political history of the Middle East than the average Gogglebox viewer. Maybe he genuinely believes that those ‘complaints from both sides’ automatically cancel each other out.

Or is that over generous to the person who recently:

“hit back at attacks on the broadcaster by some of its biggest stars, such as David Dimbleby and Jennifer Saunders, complaining that high-profile critics were damaging the corporation and “driving staff mad”

"I would like to call on those who are paid by the BBC but criticise it in media interviews and in public to think hard before they join the daily chorus of BBC-bashing that takes place in some quarters.” [...]"From now, I'd like to call on everyone who believes in the BBC to get behind it, to speak up for it, to celebrate its successes and help us explain why the BBC really matters and sits proudly at the heart of public service broadcasting and Britain's creative industries – rather than find ways to undermine it.”

Benefit of the doubt. Danny Cohen doesn’t understand the BBC’s anti Israel bias. Maybe he doesn’t recognise the myriad inaccuracies when he hears them, or perhaps he does, but he doesn’t have any clout with what is after all James Harding’s news department.

That’s roughly what his friend Tom Gross is saying.

“Mr Cohen’s friend, journalist Tom Gross, told the JC: “Danny Cohen is in a delicate position. Because he has an obviously Jewish-sounding name, he is often asked to defend what many see as BBC News’s biased coverage of Israel.”

(So does he or doesn’t he defend the BBC’s news coverage?)

With a friend like Tom Gross, how could Cohen possibly “not know” about the BBC’s role in inflaming antisemitism?

Well, let’s assume he really doesn’t get it. Could his ‘uncomfortable‘ remark have been addressed to Israel? Maybe he was indirectly pleading that when devising its response to Palestinian ‘resistance’  the Israeli government should think, firstly, of the backlash?
If he refuses to grasp the concept that his BBC is has anything to do with the rise in antisemitism, maybe it was a plea to the Israelis not to be beastly to the Palestinians, because look, diaspora Jews are bearing the brunt.

Surely that’s ridiculous. Or is it?

Hugo Rifkind and Daniel Finkelstein, amongst others, have also noticed that uncomfortable feeling in the UK. Some recommend keeping a bag packed just in case, like in the final trimester of pregnancy, when you might have to make a hasty exit.

The press has put varying spin according to particular political preferences, upon this interview. The RT article, for example, is followed by a number of very nasty antisemitic comments, neatly demonstrating the antisemitism the article addresses.

Other articles almost gratuitously include the pro Palestinian accusations that the BBC  failed to properly represent their case.  The only article I’ve seen that gives an honest appraisal of the BBC’s part in fuelling this situation is here, in Commentary Magazine.

“there is no escaping the fact that both the BBC and the Labor Party have played a role in stoking the kind of contempt for the Jewish state that leads directly to the increasingly common verbal and physical attacks on British Jews.”
“Danny Cohen only took over as head of BBC television in May 2013, and so can hardly be held responsible for the BBC’s long legacy of slanted reporting on Israel.’
“So many of the accusations thrown at Israel today echo far older incarnations of Jew-hatred. Once it was accusations of Jews murdering and kidnapping Christian children, and now the accusation is of Israelis imprisoning minors and bombing Palestinian children. Once it was said that the Jews poisoned wells and caused the crops to fail, now that waste water from settlements pollutes Palestinian fields and drinking water. Similarly, the prominent depiction of blood and Palestinian children in contemporary political cartoons about Israel mirrors so precisely the imagery found in medieval anti-Semitism. What was particularly remarkable about medieval anti-Semitism was that whether it was the show trials of the Talmud, the Spanish Inquisition, or the numerous blood libel cases, time and again the names of Jewish converts who had risen high in the Church establishment are found littering the history books on account of the unique role they played in putting anti-Jewish ideas into non-Jewish heads. Perhaps there really is nothing new under the sun.”