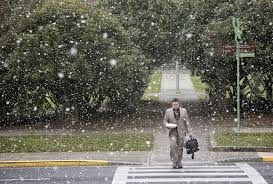 Various fleeting thoughts have been floating across my mind today, falling like snowflakes...

I've seen no pictures. I've seen nothing on 24 hour news. I am well accustomed to seeing every rooftop that descends in Gaza because that's where all the reporters are, in the same hotel, all chatting away and all swapping photos. But as far as Syria's concerned, they're all absolutely petrified to do anything or report on anything.

That seems to me to be a pretty good description of the BBC's reporting of the Israel-Palestinian conflict as compared to its Syrian coverage.

That's not to say, however, that the BBC hasn't devoted a lot of website space and airtime to the Syrian conflict. Quantitively-speaking, it's given more time to it than it's devoted to Israel-Gaza (pace BBC Watch), but, still, qualitatively-speaking, its Syrian coverage has been largely at one remove (despite Jim Muir presence, and Mishal Husain, Jeremy Bowen and Lyse Doucet's very-fleeting visits) while its Gaza coverage, earlier in the year, was an all-hands-on-deck-plus-the-kitchen-sink BBC free-for-all, and panned out exactly as Maureen described it.

That said, who in their right mind would blame the BBC for preferring to remain close to the receiving end of carefully-targeted Israeli military action rather than placing themselves in targeting range of the intended mass-murderousness of either Bashar's men or Caliph Bagdaddy's boys? 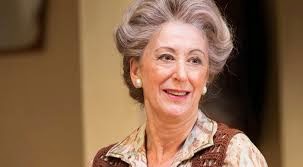 Maureen (and why not 'Dame Maureen' yet?) also wants us to take in many more Syrian refugees, comparing their present plight to that of the the refugees fleeing Nazi Germany in the late '30s.

My anti-mass-immigration hackles sprang up straight away but, given the fight-or-die viciousness of the (until-shockingly-recently-Nazi-war-criminal-harbouring) Assad regime and the much scarier and completely undisguised genocidal intent of the Koranic idealists of Islamic State (and their barely-less-murderous killalikes), that's hardly scaremongering, is it?

The area, as Israel knows all too well (though BBC viewers might not), is full of antisemites, and in the area (and beyond) the dangers for non-Muslims are rocketing towards the farthest reaches of the worst imaginable.

So what are we to do?

That said (again), some BBC reporters, most notably Mishal Husain, may be using their position to advocate for a much greater granting of refuge status to Syrian refugees (particularly Muslim ones) by the UK government, but we must remain very careful about who we're letting in. We shouldn't be letting in Islamist sympathisers fleeing Assad-controlled areas...

...a fear I don't hear being highlighted by the BBC.

So what to do?

On related matters, there's a fascinating Radio 4 documentary on the BBC i-Player at the moment called Terror and the Oxygen of Publicity. It comes courtesy of the BBC's security correspondent Gordon Corera. 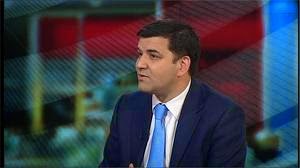 I strongly recommend it.

It gives a potted history of terrorists' attempts to exploit the media and the controversies surrounding how media organisations respond to those attempts. Does "reporting the news" sometimes risk "giving publicity to terrorists"?

Gordon Corera does a good job on the whole. His programme is definitely one of the BBC's more illuminating takes on the issue of terrorism and the media and it really made me think - so much so that it would take too much time to blog in full my reactions to it (so you'll have to judge it for yourself). Plus, he really did seem to be trying to air the issues fairly -  even, from time to time, challenging his mainstream media colleagues.

Please listen to it for yourself though (and gird your loins in advance for that smug BBC boss).

As far this week's The World This Weekend (Radio 4) is concerned (hosted today by its old presenter Shaun Ley rather than its new presenter Mark Mardell, who was doubtless otherwise engaged eating whole turkeys in one gulp and platefuls of mince pies at one sitting), it was good to hear a professional pilot talking about the missing Indonesia-to-Singapore airline (though not good in the sense that he held out very little hope for the poor passengers and their families, bless them).

Then novelist Margaret Atwood talked about the future. For an esteemed novelist she's an oddly dull speaker - so much so that I almost nodded off...

And while I'm on...why oh why oh why (as they say on Points of View) do people on BBC-bashing/right-leaning blogs keep defending RT (aka Russia Today) as if their lives depended on it.

Yes, it provides an outlet for plenty of very-un-BBC points of view, but it is (and, yes, it absolutely is) a propaganda tool of the Russian government and, though it may occasionally strike a chord with the distrustful Right (including me), it often veers into wild 'truther' territory and complete far-Left lunacy - all, cynically, in aid of Russia's national interest.

RT is not better than the BBC.

RT, the Russian fifth column in our midst.

Alan at Biased BBC - who (very unfairly) got told off by one badger-hating commenter for being sarcastic  (ha, ha! that commenter should try some of my posts - they'd completely flummox him) - posted a piece today about yet another pro-immigration "sob story" published on the BBC News website. 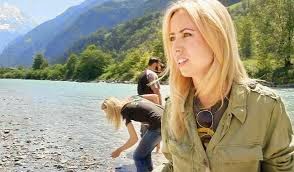 The reporter, who Alan very gallantly doesn't name and shame, is the BBC Asian Network's Catrin Nye, above  (who we've covered before).

I've been reading Catrin's Twitter feed and her collected reports on Journalisted and it seems to me that she's a very typical BBC reporter - liberal-minded, pro-immigration, sycophantic towards Muslims, not keen on UKIP or the Daily Mail, etc, etc, etc.

There's another point of view to hers, and she should wise up to it and bear it in mind while reporting.

Not being snowed in I've got to go back to work tomorrow. Oh, I wish it could be Christmas every day!
Posted by Craig at 22:00