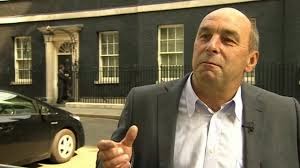 Crikey, this is going to send the #bbcbias lefties on Twitter into overdrive!

UKIP has just announced its new Director of Communications:

Paul Lambert one of the best known figures in Westminster and a veteran of many years standing in the BBC's political coverage has accepted the role of Director of Communications working with the UKIP media team. He will be an important addition to an expanding and professional team as UKIP gears up for next years' general election.

Mr Lambert said: "Over the past few years I have been following the work of UKIP and Nigel Farage and I feel that he is changing British politics for the better. I am delighted to be able to add my experience to his team. He has been one of the best, most hardworking and most normal political figures I have worked with, and trust me I have seen the lot".

"UKIP is today the place to be if you want to be a part of a party that is changing the face of British politics for the better, and providing a new, clear and honest voice".

UKIP Leader Nigel Farage said: "I am delighted to welcome Paul to our team. Knowing him, and how effective he has always been in getting his message across he will fit UKIP like a glove. Drive, passion, hard work, honesty and immense good humor are the hallmarks of Paul. It'll be fun working with him".

Paul Lambert may not be a famous name but he's a very famous voice. He's the legendary 'Gobby' - the man who shouts embarrassing questions at politicians as they enter 10 Downing Street ["Are you going to resign, Mr Mitchell?"] - a loud voice long-term BBC News watchers have heard booming out hundreds of times over the years, making mainstream politicians squirm as they approach the doors of power.

And now he's going to make them squirm all over again!

[P.S. This casts a previous post of ours in an interesting new light for it was Gobby (rather than Michael Crick) who exposed the fake Romanians at an anti-UKIP protest back in May.]

Further update: Alongside all the Twitter lefties and their often shockingly nasty comments, it's been fascinating watching the world of Twitter react - especially the media types, who have been out in force. (I feel like Michael Buerk watching Kendra on I'm a Celebrity - very anthropological).

Both the BBC tweeters and the non-BBC media tweeters appear to be have been collectively 'gob-smacked'. They didn't see it coming, and it's a very big story in the media bubble.

Interestingly, Paul Lambert appears to have been very well-liked by everyone, BBC and non-BBC alike. There have been some very warm tweets about him from BBC reporters.

I haven't come across any embittered, anti-UKIP tweets from BBC types yet (DB at Biased BBC will doubtless spot any that I've missed), though many of 'the usual suspects' haven't tweeted their thoughts yet. (I bet it's flummoxed them!)

How quickly Gobby goes from hero to zero at the BBC we'll have to see. Hugh Sykes - the living embodiment of BBC News values - hasn't had his say yet. When he does - or if he does - that will be a clue.
Posted by Craig at 12:37