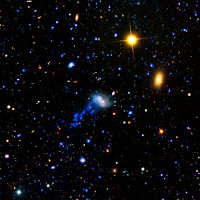 This morning's The Infinite Monkey Cage Christmas Special (on the subject of ghosts and ghost stories) inevitably began with a now bog-standard BBC quip from Robin Ince about 2016 being a terrible year (see yesterday), but who couldn't forgive our (Christmas) Robin for that when we also had this kind of thing?:

Neil deGrasse Tyson: But if I may broaden the concept of 'ghost'? As an astrophysicist it's not hard for me to think of stars that have long ago died whose light only just reaches us on Christmas Day telling us that they once did die. And that stream of light is a ghost, a kind of spirit energy of a last gasp of a star's life. So when I look up at the night's sky I know that some fraction of the stars I see are ghosts of a star that was once alive.
Brian Cox: No, it's just photons.

And Nick Baines, the go-ahead Bishop of Leeds, shared a joke:

I was walking down the road and I saw a baby ghost on the pavement. On the other hand it could have been a handkerchief.