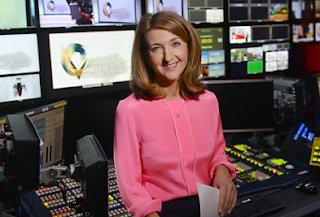 The BBC's listen-known-about Complaints and Clarifications page has been very quiet recently, so much so that I suspected they'd chosen to abandon making their findings public. Then suddenly, this past week, came a small rush of rulings.

Here's one of them that you may have missed:

A viewer complained that, during a debate on the issues in the referendum campaign, Victoria Derbyshire had misleadingly suggested that reallocating the UK’s net contribution to the EU budget to other areas such as the NHS would have a severe impact on farm subsidies.
Challenging a point made by Jane Collins MEP, Victoria Derbyshire said “if that £8.5bn went to the NHS, that would mean farmers who get more than 50% of their income from the EU would be decimated”.
This reflected a confusion between the UK’s net contribution (of £8.5bn after payments from the EU to the UK, including agricultural subsidies, have been taken into account) and its gross contribution.
Although Ms Collins tried to rebut the suggestion, she did not do so in terms which would have removed the misleading impression.
The complaint was upheld and the relevant information was drawn to the presenter’s attention after the broadcast, and will be borne in mind when the programme returns to the subject.

And here's another story you might have missed, as reported in The Catholic Herald...

The BBC's editorial complaints unit has ruled against BBC One's News at Six for a July report that stated “Silence was the response of the Catholic Church when Nazi Germany demonised Jewish people and then attempted to eradicate Jews from Europe.”

The ECU called that "unfair", saying that the BBC's reporter “did not give due weight to public statements by successive popes or the efforts made on the instructions of Pius XII to rescue Jews from Nazi persecution, and perpetuated a view which is at odds with the balance of evidence.”

It resulted from a complaint from cross-bench peer Lord Alton of Liverpool and Fr Leo Chamberlain, the former headmaster of Ampleforth.

The complaint took "nearly six months" to resolve, says The Catholic Herald (though as the report went out on 29th July and the Herald reported this on 9th December it might have been more accurate to say 'over four months'). 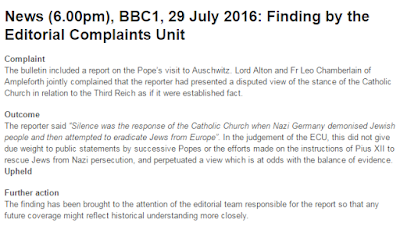