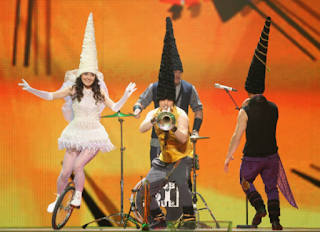 The burning question on the lips of BBC Breakfast presenters this morning has been, "From horse heads to monkeys, it can only be Eurovision. But will the UK feel the Brexit backlash?"...

...just as it was the question on BBC One's News at One yesterday: "And it's the first Eurovision Song Contest since the EU referendum tomorrow. Will Brexit scupper Britain's chances?"

Yesterday morning's BBC Breakfast also discussed the "speculation that Brexit could affect the UK's chances of winning" and asked, "Will Brexit mean that [the UK] meets its Waterloo?".

And on Thursday's BBC One News at Six, it was headline news: "You guessed it, it's Eurovision time again - but could Brexit bad blood mean nil points for our Lucie Jones?"

Now, the obvious answer to this question (unless you're doom-mongering about Brexit) is that we've been near to the bottom of the final rankings for most of the past decade or so, and we can't do any worse than we did in 2010 when we came last.

Maybe, post-Brexit, we'll see the UK regaining our pre-1973 heights when we won twice, came second eight times, and only fell out of the Top 4 twice - and never came anywhere near the bottom.

Update: Tonight's PM on Radio 4, introduction: "Meanwhile in Kiev, worries that Brexit will be sending the UK entry home with nul points again."
Posted by Craig at 12:14